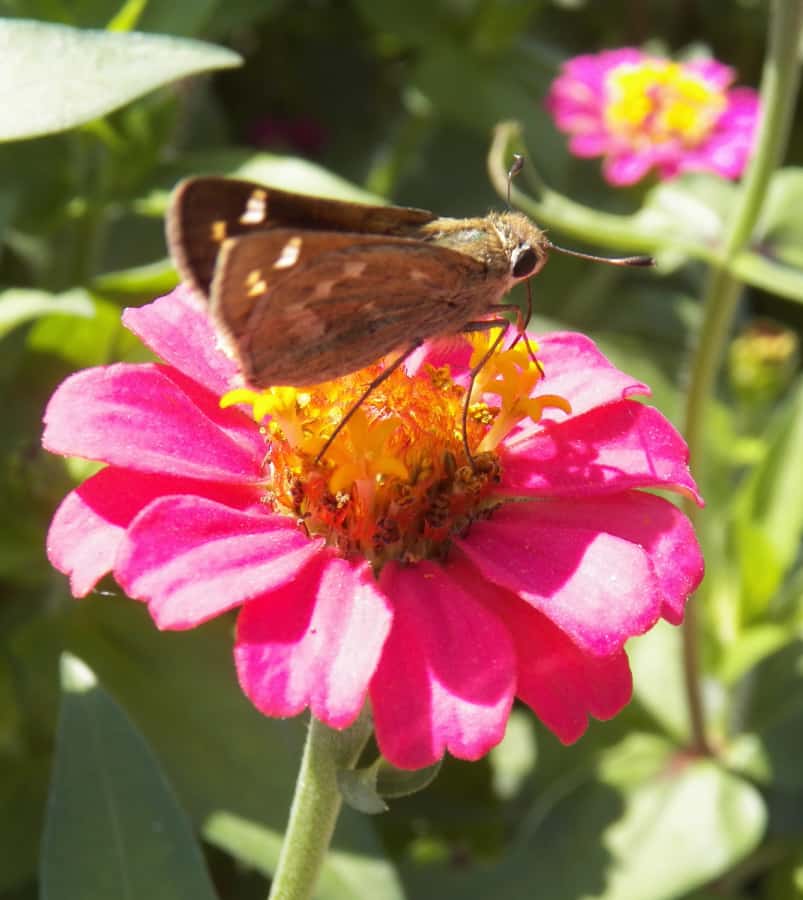 What are skipper butterflies and why are they separate from other butterflies? Skippers are often termed as an intermediate group between butterflies and moths. What does that mean? It mean that they have characteristics of both groups within Lepidoptera.

Skipper butterflies have furry bodies similar to moths, but fly during the day and sit at rest similar to butterflies. They are called skippers because of their short flights, which are often quite erratic. This also makes them difficult to photograph in the field. Luckily, they mostly sit still when feeding on nectar at the flower.

While there are some 40 species of grass skippers in the United States, only 12 are considered common in the Central Great Plains region, mostly around remnant prairies. There are 7 species which I have consistently photographed in the area and will discuss here.

The Delaware skipper is common and widespread throughout the Eastern United States, especially where remnant prairies and meadows occur. They can forage on many different flowers, and despite their smaller size, they have long tongues for feeding on trumpet vine.

Delaware skippers complete their life cycles on grasses such as big bluestem and switchgrass, 2 important species in native tallgrass prairies.

The dun skipper, which I think should be called the chocolate skipper is a distinctive chocolate-brown in color, and widespread throughout the U.S. Dun skippers feeds on sedges (Carex species), which are not true grasses, but grass-like. Sedges have tringle shaped stems. Because there are 500 species of sedges in the U.S., dun skippers are quite common.

This is one of the most common grass skippers that I see, not only in my gardens, but on the prairies as well. It is a very active immigrant, spending winters in Central America and as far south as Argentina. In the heat of our summers, they travel as far north as Canada. The fiery skipper feeds on a lot of weedy grass species, including crabgrass, bentgrass, and bermudagrass, as well as other grasses.

I have no idea why it is called the least skipper, because it is quite common in the Eastern U.S. Overwintering in grass tents as a larva, the least skipper feeds on various grasses, including bluegrass and bentgrass.

Often just called sachem, without the skipper, this is one of the most commonly seen skipper butterflies in our area. I had no idea how common they were until I started identifying all my skipper butterfly photos last winter. There is a lot variation between individuals of this species. An immigrant from South and Central America, the sachem is a breeding resident in our area. They use a variety of grasses as their host plants.

The tawny-edged is the 3rd most common skipper in the Central Great Plains region. At least according to my personal photography records. 2020 was a banner year for these butterflies, wherein I was more of these than any other skippers. Because their caterpillars feed on a variety of grasses, including lawn grasses like bluegrass and crabgrass, they are quite common in residential yards as well as in natural areas.

The zabulon skipper is quite widespread from the Rocky Mountains eastward to the Atlantic Ocean, but more in the southern half of the Eastern U.S. It is a pretty butterfly, despite being small, and really caught my attention when I first saw it. Their caterpillars eat a variety of grass including lovegrass, bluegrass, bentgrass, wheatgrass, orchardgrass, and wildrye.

There are 121 species of spread-wing skippers in the Unites States, but we have only 8 common species in the Central Great Plains region. Spread-wings mostly sit at rest with their upper and lower wings spread wide, collecting sunlight.

The common sootywing is one of the skipper butterflies that I observe the most, because the larvae is so easy to find on weeds. Caterpillars of the common sootywing feeds on weeds such as amaranth (pigweed), lambsquarters, and goosefoot. Also, they feed on celosia, beets, and chard. They overwinter as larva in leaves and debris.

One of the most commonly seen spread-wing skipper butterflies, the silver spotted skipper is the largest skipper in Kansas. It often feeds and rests hanging upside down from plants. Silver spotted skipper caterpillars feed on wood legumes such as black locust, honeylocust, blue false indigo, wild senna, wisteria, and American groundnut.

Considered to be rare in Kansas, I see the funereal duskywing every summer. Sometimes in my own garden, but usually in wild areas around state parks or prairie remnants. Defined by the white fringe on the hindwings, it is a dainty butterfly in the garden. This southern U.S. skipper utilizes legumes as its host plants.

Supposedly, this skipper gets its name from the younger brother of the entomologist that first recorded in the 1700s. There are several duskywing skippers that look very similar so it is important to have a good guide book when identifying them. A Photographic Field Guide to the Butterflies in the Kansas City Region by Betsy Betros is my go to book for butterfly identification.

Horace’s duskywing skippers mainly on species of oaks in the Central Great Plains region. Other larval foods include wisteria and chestnuts, which are not common in our area.

The wild indigo duskywing skipper is an important pest of baptisia. I say important pest, because native moths, butterflies, and skippers are part of the ecosystem and provide food for birds and other wildlife, while eating plants and fungi. The caterpillars feed mainly on baptisia. In our area, there are 3 species of baptisia, and gardeners grow many cultivars.

The common checkered skipper does not have any of the fancy names like duskywing or sootywing, but it is a very pretty and dainty butterfly. Of the skipper butterflies, I think this one is my favorite. When it is landing on blooming wild alfalfa, the combination of the brown and white colors of the butterfly against the purple, pink, and green of the plant is quite striking.

Common checkered skipper caterpillars feed on the plants of the mallow family, including hollyhocks, poppy mallows, and hibiscus.

Now that you have met the pollinators, its time to think about what nectar plants may be best for them. I toughed already on what each skipper species needs for its larval host food, but what about the adult butterflies? You cannot go wrong with native wildflowers, but many annuals and nonnative also work well.

The following 10 plants are the best nectar providers for skipper butterflies, that I have observed. Certainly, they may feed on a greater variety of native perennials and annuals, but these are what I have seen the most activity on.

Skipper butterflies are dancing butterflies that help the ecosystem in many ways. Look for these beauties in prairie remnants, large gardens, and diverse landscapes. Having butterflies in your garden and landscape help encourage children to learn about gardening, and it helps relax us gardeners, too.