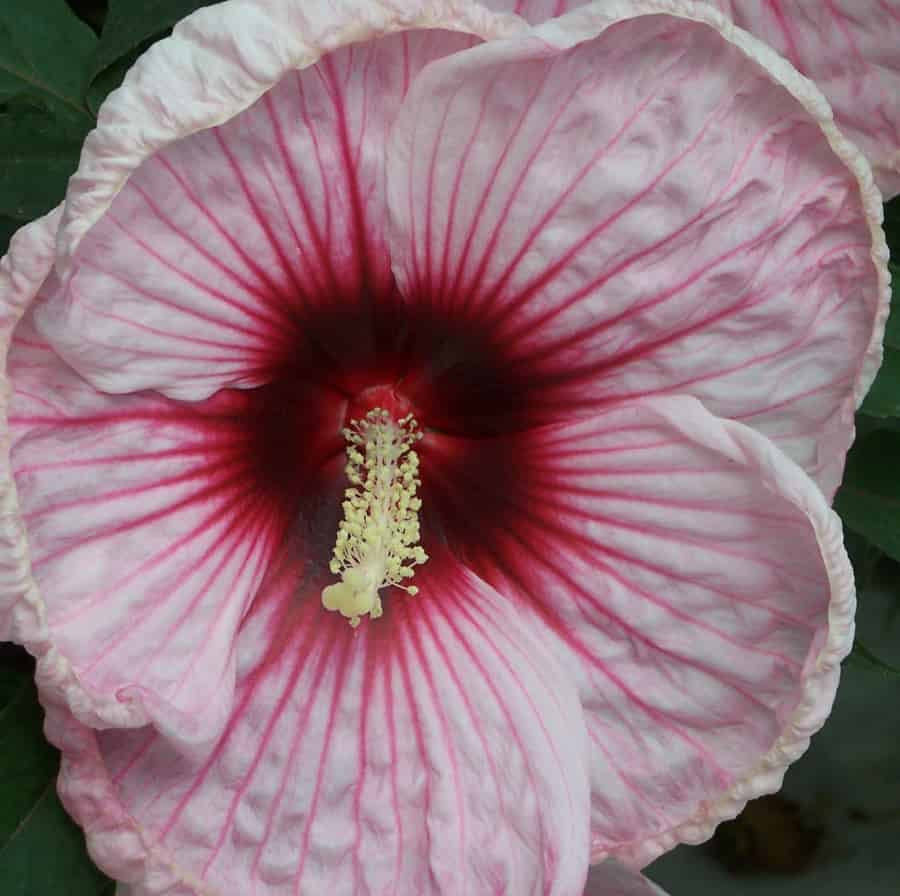 Mallows in the garden can create a tropical-like atmosphere, if used correctly. I like to use the shrubs, perennials, and biennials that grow well in my region to create the desired look. Once they are in place, I can look to adding non-hardy tropicals such a palms and elephant’s ears to my garden experience.

The mallow family consists of over 200 genuses and more than 4000 known species. Here in the Central Great Plains region, we are concerned with just 3 genuses and 5 species combined. From these plants we can get many cultivars that will provide tropical flowers on lush plants. Those plants are as follows:

In each section I will go over the 5 different species of mallows for our garden. All care for individual plants including pruning times and tips, where to plant, sun and soil requirements, and best cultivars will be included. I will discuss insects and diseases at the end. Enjoy the ride!

While the flowers of the Rose of Sharon are not large and super showy, once they start blooming, they can continue for several weeks. Because of the nature of growth of this shrub, it can be used for screening, hedges, or as a summer windbreak. No one really knows where the name “rose of Sharon” came from with this plant, because it is native to east Asia and the location of Sharon is along the Mediterranean coast.

But one thing is for sure, here in the Central Great Plains, we use rose of Sharon (also called Althea) because we love it. Are there varieties that reseed and become problematic? Yes. Do we sometime forget to prune in spring and lose flower power? Yes. But rose of Sharon it is, and will be called.

Where to plant Rose of Sharon

Because its growth is shrub-like, we need to plant these mallows where they can be easily reached for pruning, yet where they have room to spread. The habit is vase-shaped and upright, so they are great as a screen along a patio or on the edge of the property as a deciduous hedge. Most cultivars are larger, though new breeding programs have yielded up dwarf varieties.

The majority of cultivars are hardy from zones 5 to 9, with some variegated selections doing better in zones 6 to 9. They should be placed in full sun to part shade. I have some in part shade now, and they do not bloom as well as those in full sun. Remember, full sun is 6 or more hours of sunlight per day.

Rose of Sharon prefers well-drained soils, but is quite adaptable to clay and heavy clay, so long as they do not sit in standing water. They are drought-tolerant, but prefer a little extra moisture when the weather is hot, so putting them on a drip irrigation system can help. These mallows prefer a soil pH from 5.5. to 7.5, meaning they like alkaline soils. This is great news for us who live in a high pH soil areas.

When and how to prune Rose of Sharon

Rose of Sharon blooms on new wood, meaning that flower buds are set on the current season’s new growth. That means that they should be pruned in late winter or early spring. But it also means that you can shape prune them later, such as in June or July in Kansas, and still get a good set of blooms.

On many larger varieties, it best to prune back the previous year’s growth, because they will grow that much (and possibly more) in the new year. I like to prune them in March and April. Try to cut the stems back to a live bud, if possible. Remove all dead wood back as far as it goes. Also prune away any twisting or broken branches.

Best cultivars of Rose of Sharon

This is where most of the hardy hibiscus mallows come from. The hardy hibiscus have the showiest flowers of all the hardy mallows. Sometimes the flowers can be as big as 18 inches in diameter! There are lots of colors of flowers and leaves available to the home gardener. Some would call these mallows shrub-like, but really they are perennials that can grow as large as small shrubs.

Where to plant rose mallow

Rose mallow, aka hardy hibiscus, should be planted in full sun locations. One of the last perennials to green up in late spring, rose mallow likes it hot. Because of this, I get many questions in the spring about whether they are dead or not. But they always come back. A god place to plant hardy hibiscus is in full sun, along the south or west side of a brick house, where the heat off the brick will keep them happy.

Rose mallow grows natively in wet meadows, swamps, and marshes throughout the Southeastern United States. We generally plant them in dry soils in landscapes. But they are quite drought tolerant, and most of the cultivars have been bred for landscaping. If you put them on a drip irrigation system in the landscape, they will stay happy.

When and how to prune back rose mallows

Rose mallow has thick, spongy stems that can be cut back in autumn after a hard freeze, or in late winter/early spring before the new shoots emerge. From the base of the plant, new, green shoots will emerge. The plant does not regrow from the previous year’s shoots. I usually cut the old shoots off in autumn, as close to the crown of the plant as possible.

This mallow is native throughout the Midwest, lower Great Plains, and the Southeastern U.S. The leaves, instead of heart shapes like those of rose mallow, are shaped almost like a hilted sword. They grows along the edges of marshes, swamps, and lakes. While there are few, if any cultivars of this species, I put them in because of their value to bog gardens and wetlands.

They are also used a lot with cultivar breeding of hardy hibiscus, being hybridized with H. moscheutos and H. coccinea. Planting location and pruning is the same as for rose mallow.

This species of mallow is actually a groundcover or ground-hugging vine. I would not call it a true groundcover, because the plant sends out new runners from the base each spring. The main part of the plant is a storage root, much like an overgrown carrot. This native perennial is found throughout the central and southern Great Plains.

Where to plant purple poppy mallow

This groundcover-like plant prefers to be in full sun, and can handle hot conditions. I like to use it mixed into meadow gardens and prairies, where it can ramble across the ground, among other plants. These mallows can handle well-drained to heavy clay soils, and are very drought tolerant.

When and how to prune

Purple poppy mallows should only have the previous season’s growth removed back to the crown or base of the plant. This can be done in fall or spring. Also, you can prune the green runners back during the summer to keep it from flowing over sidewalks and walls, if needed. Blooms are borne along the whole length of each runner, in succession.

There are no cultivars of purple poppy mallow.

The only biennial mallows of this post, hollyhocks are a bit old-fashioned for most home gardeners. However, I would recommend them to anyone wanting a tall stalk of brightly-colored flowers, in almost every color. Hollyhocks have been grown for centuries throughout Europe and Asia, and where brought to the Americas with the first settlers.

Where to plant hollyhocks

Because they are biennial, you need to remember that you will generally have plants one year and flowers the next. But, they are very vigorous reseeders, so you should have flowering stalks every year. In the early years of this country, hollyhocks were planted in a wide arrangement of locations.

They were used in front of evergreen hedges, to hide unsightly trash bins or other things, and even planted next to the outhouse. There are both single and double flowering varieites, in an array of colors. In the late 1800s, there were as many as 30 cultivars available, but not so many now.

Plant them in full to part sun, in any type of soil except water-logged. I have some hollyhocks that persistently come up and flower in my shade garden, and because I love them, I let them be. I think it is best to plant hollyhocks from seed in early spring.

Insects and Diseases of Mallows

While there are not a lot of problems associated with mallows, the biggest problem is the invasive Japanese beetle. All the mallows are susceptible to damage from this insect. More on the Japanese beetle can be found HERE.

As mentioned above, Japanese beetles are the biggest problem faced by mallows. For us however, they are only a problem for about 6 weeks in the summer. And, I have seen less to no damage on hollyhocks and purple poppy mallow. But all of my rose mallows and rose of Sharon bushes have gotten damage.

Other insects that can attack mallows include:

There are some moths and butterflies that use mallows, the native Rose mallow and Purple poppy mallow as a host plant.

Most of the newer cultivars of hollyhocks, rose of Sharon, and rose mallows are disease resistant to any of their former problems. But a few diseases do persist on older varieties.