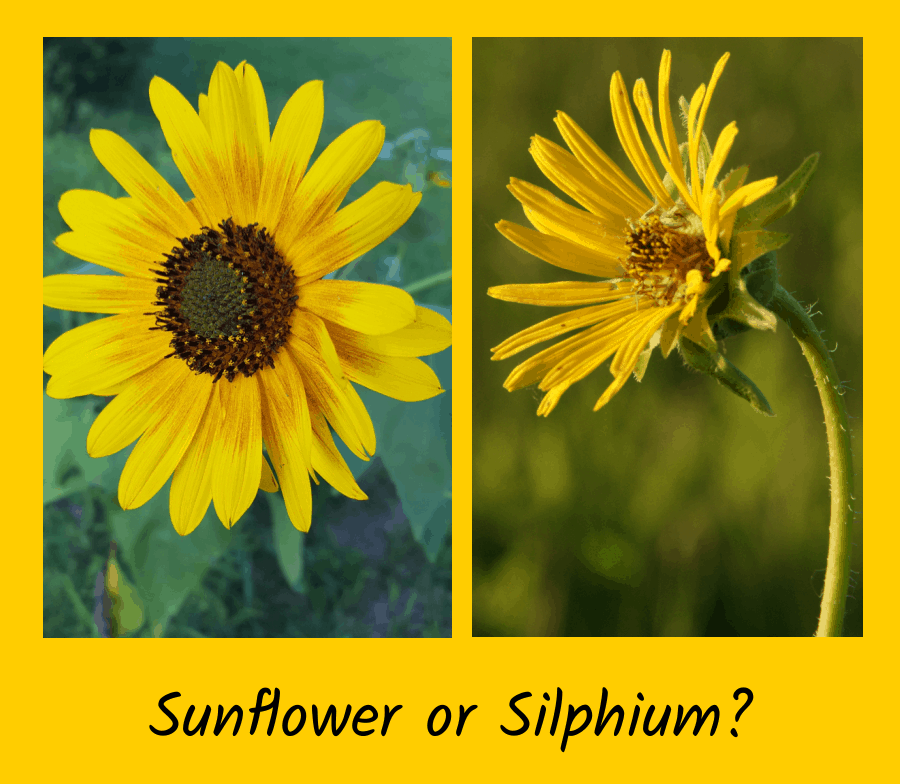 One of the things that comes hard to me is when I am with folk who do not now their sunflowers from their silphiums. Or any plant look-a-likes that may happen. I often get to help lead native plant walks, as well as tour home gardens where look-a-likes occur frequently. But what are silphiums? Because this groups of sunflower mimics has no better name, I use the genus for the group.

The Silphium genus contains 13 species of plants spread across North America, and 5-6 species here in the Central Great Plains. They look like sunflowers. Well, at least the flowers do. But there are so many different sunflower species in the U.S. that it can be a challenge even for experts to distinguish them apart. There are 54 (yikes!) species of sunflowers and at least 13 hybrids. 13 of which occur natively in the Central Great Plains.

Why do these flowers have to look so similar? Because they are members of the Aster Family, a much broader group of plants, many of which have similar looking flowers. Other species that may be confused with sunflowers or silphiums include asters, coreopsis, rudbeckia, bidens, echinacea, grindelia, packera, senecio, heliopsis, and helenium.

Before we look at sunflowers, let us look into the 4 most common silphiums in the Kansas/Nebraska/Missouri region.

As I mentioned above, there are 4 species of silphiums that can be commonly found in the Central Great Plains, and which even turn up at nurseries. Here at Grimm’s we have had 2 of the 4 species for sale at some point. Silphiums are extremely long-lived plants, and are valuable for pollinators as both nectar and host plants. Below are some the pollinators of silphiums, as I have observed.

But what are the main differences between the 2 genuses? The flower parts are similar, but different enough to help with identification. There are other morphological cues too, but for anyone who is not a biologist these differences may be too difficult. Let us look at the flowers instead.

So named for the compass-like ability of the leaves, compassplant is an under-rated plant for the prairie garden. The leaves, which are deeply lobed, orient themselves facing east on top and west on back, at least during early emergence and growth. Few studies have been done on the why’s of this, but research has concluded that only sunlight provides this compass orientation.

This long-lived perennial has a clump of leaves that grows 2 to 4 feet tall and wide, though averages around 2 feet in size. In mid-summer, tall, hairy stems of flowers rise up from the clumps, reaching 3 to 7 feet in height. There are many pollinators which attend to the yellow flowers.

If you are raising compassplant near where cattle are, beware, for the bovines love to eat the leaves of compassplant. In high-quality prairies, compassplant pairs well with big bluestem, eastern gamagrass, Indiangrass, and switchgrass. It grows well in ditches as well as well-drained and dry prairies.

This is perhaps the most unassuming of the silphiums, because it looks more like a sunflower, or even false sunflower than the other silphiums. My own experience with this plant is more limited than the others, but I do see it out in some of the prairie remnants I frequent. It grows in the heartland, from Kansas to Kentucky, and from Iowa to Louisiana.

The leaves attach to the stems of the plant in an opposite arrangement, but turned 90 degrees at each node. Plants of prairie rosinweed grow 1 to 4 feet wide and 2 to 6 feet tall. The yellow flowers are very similar to false sunflower (Heliopsis helianthoides).

Of all the sunflower look-a-likes, prairie dock is my favorite. This silphium has the biggest leaves! For a prairie plant anyways; I know that elephant ear and canna can have larger leaves. But for Zone 5b, prairie dock is a beautiful perennial just for the leaves. The large, heart-shaped leaves grow 6 to 8 inches wide by 8 to 14 inches long each, and grow in a large clump up to 4 feet in diameter.

In mid to late summer, prairie dock sends up tall, leafless flower stems, sometimes up to 12 feet in height. The longer the plant has to grow, the bigger the flower stalks are. This is a long-lived plant, and can live for decades without division or extra care.

Although cup plant generally prefers wetter soils than the other silphiums, it does well in meadow gardens too. I found it growing in my ditch 3 years after moving in, and have left it alone because it is such an interesting plant. I know why it is called cup plant too. The leaves overlap each other around the square stems, forming a cup that holds water in rainy seasons.

This cup of leaves is a great thing for thirsty insects, birds, and small mammals or amphibians. I have seen tree frogs perched near the full leaves, waiting for thirsty insects to come along. The size of cup plant though, would make it a daunting plant in the garden. It grows 2 to 3 feet wide by 4 to 10 feet tall. I do have a customer however that has some around a barn, and it looks quite pretty when in bloom.

What I really like about sunflowers is their diversity. There are far more sunflowers (54 species) than silphiums in North America, and they can be found in most extreme environments. Of the 13 species present in Kansas, there are 4 that I consider important members for potential landscapes, or at least, meadow gardens. (See more on meadow gardens in the next post).

Sunflowers do not follow the sun from East to West as is supposed in lore, but have been called such for their sunny flowers. Fields of annual sunflowers hold their heads to the East, facing the upcoming sun as it crests the horizon. There are quite a number of insects that feed on the leaves, stems, seeds, and flowers of them, as well as birds who eat the dried seeds. Pollinators abound on sunflowers, especially bees on the annual sunflower (Helianthus annuus), which is the Kansas state flower.

It seems funny that we have so many available cultivars for willowleaf sunflower, when its native range is tiny. It grows natively in Kansas, Missouri, Oklahoma, and Texas. But mostly in Kansas. In the wild, plants can grow to astounding heights of 12 to 16 feet tall, but almost immediately flop if given any amount of shade.

The texture of the leaves of willowleaf sunflower are what makes it such an important plant for the garden. As a native plant, it would not work anywhere but a meadow garden, but the cultivars make it possible for almost any full sun garden. There are 3 available cultivars of willowleaf sunflower which can be planted in a variety of locations, within each hardiness zone.

‘First Light’ was the first cultivar of willowleaf sunflower that I added to my garden and I have been impressed not only by the gorgeous blooms, but also by its drought hardiness. This autumn has been the driest in my garden that I can remember, but ‘First Light’ looks better than ever. And certainly better than any other plant in my garden. It grows 3 to 4 feet tall and wide in Zones 5 to 9.

‘Autumn Gold’ is another great cultivar of willowleaf sunflower. It is a bit more compact than ‘First Light’, but more hardy to warmer areas. We planted ‘Autumn Gold’ in the Monarch Waystation here at Grimm’s this spring and I am impressed by the solid gold flowers. It grows 2 feet tall and wide in Zones 5 to 10.

‘Low Down’ is an even smaller version of willowleaf sunflower, yet I have not tried it because of hardiness issues. Coming in at a tiny 18 inches tall and wide, it is hardy in zones 6 to 9. I may try it yet, as we are in Zone 5b, and can sometimes grow even some Zone 7 plants.

You have seen big fields of annual sunflowers in photos, along the roadsides, or even in movies. Those sunflowers have been hybridized and bred to have huge seedheads, for the seeds. The true annual sunflower, which is the Kansas state flower, is a tall, multi-stemmed plant that can reach 18 feet tall and have dozens of flowerheads on it. The flowers may range in size from 4 to 10 inches across. It is native from the Mississippi River westward.

However, because of breeding and selection, there are a variety of garden sized annual sunflowers available. There are many noteworthy selections that can brighten the garden and be left for the birds in autumn and winter. Goldfinches, cardinals, and nuthatches relish the seeds. I have taken dried seedheads home to my chickens as well.

Native throughout the Great Plains region, from Canada to Mexico, the Maximilian sunflower is a unique plant with flowers all along the flowering stem. Its habit it typically upright and can grow in large clumps or colonies. Being very drought tolerant, the Maximilian sunflower is a showstopper in autumn, with its clouds of yellow flowers which are often attended by clouds of yellow sulphur butterflies.

Only one cultivar do I know of. ‘Sante Fe’ is a selection that grows 8 feet tall by 4 feet wide and is an ideal plant for the garden. I added Maximilian sunflower to my garden this spring and was very impressed by a first year bloom. It pairs well with native grasses, asters, and rudbeckias.

Also known as Jerusalem artichoke, the tuberous sunflower is very important as both a seed source for birds and food source for humans, in the form of its edible tubers. I have personally cooked and eaten the tubers. They taste like a cross between a potato and a turnip. But I liked them anyways.

Growing in large colonies, the tuberous sunflower is a large plant, from 4 to 10 feet tall. It can grow in part shade to full sun, making it more versatile than some of the other sunflowers. Harvest the tubers in fall after the plant has lost its leaves, or if you need food immediately, any time.

Other Plant Look-A-Likes of Sunflowers and Silphiums

Now that you see the amazing perplexity and diversity of the plants in our fields and prairies, you may also begin to some of the other sunflower and silphium look-a-likes. Let us explore some of those plants.

If it was not for its stature and the way the bloom fades, you would think this was a sunflower. However, false sunflower has a more floppy appearance and the yellow flower petals do not dry up and fall off as they fade, but rather turn a tan color and stay on the plant. It grows natively in the Upper Midwest and Central to Northern Great Plains.

There are several nice cultivars of false sunflower which are great in a variety of landscapes. Pair it with agastache ‘Blue Fortune’ or a red annual salvia and you will have found a wonderful combo.

Coreopsis may be confused with sunflowers or silphiums, especially if you are not used to identifying plants. The large, cheery yellow flowers grow on slender stems 1 to 4 feet tall and 1 to 3 feet wide. The flowers are not as large as most sunflower species, but are similar in size to most silphiums.

Bigflower coreopsis is native in the Central Great Plains, mainly in Kansas, Arkansas, Oklahoma, and Missouri. There have been many cultivars to come from this native, as well as from hybridization with other coreopsis. It is a valuable plant for the garden or landscape.

Plant look-a-likes abound in nature, so be careful when learning to identify plants. Knowing your plant palette will ensure your ability top design gardens and landscapes, and beautify your own property for the future. Sunflowers and silphiums are very much alike, and may be easily confused. But they are beautiful in any garden space!