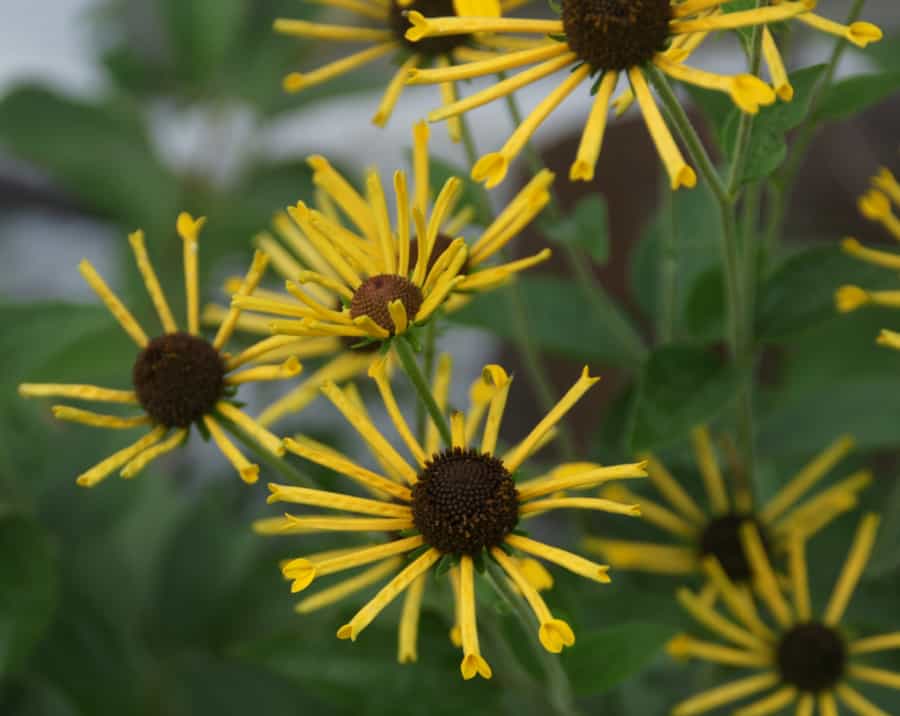 Rudbeckia, aka black or brown-eyed Susan, is our August Plant of the Month. Native to North America, rudbeckias are favored in both the old world (Europe) and the new (America) for their long bloom period and adaptability. There 23 species across the continent, but only 7 that we are concerned with.

Black-eyed Susan’s have been cross-bred for color and disease resistance. They are drought-tolerant, heat loving (most of them) and easy to maintain. In my own landscape, I have all 7 species recommended, and several cultivars. Rudbeckia attracts pollinators, has few pest problems, and are easy to establish.

Here is an in-depth look into each species and some cultivars.

This is perhaps my favorite of all the species of rudbeckia, because of the subspecies Henry Eilers. Often referred to as a cultivar, it was found in a ditch in Illinois as a stabilized mutation of the flower petals, which are rolled or quilled. But more on that in a bit.

Sweet black-eyed Susan is found throughout the central Great Plains eastward to the Mississippi River valleys, from Texas to southern Minnesota. It prefers full to part sun, in well-drained soil. What I have seen is that it spreads quickly by seed and can fill large areas. It grows 3 to 5 feet tall and has hairy stems and leaves.

Henry Eilers was a botanist and nurseryman in southern Illinois, and discovered the mutation he is named for. It was found by a railroad embankment. ‘Henry Eilers’ forms a small clump, about 16 inches across and grows 5 feet tall with quilled ray petals. Another cultivar has been bred from this discovery, ‘Little Henry‘ which grows 3 to 4 feet tall with the same flowers.

I was first introduced to this species by mother-in-law. She had a cottage garden in Northeast Kansas that was alive with this native. This species is native across most of the eastern half of the United States. It can be found often along woodland edges in full sun to light shade. It blooms from July to first frost, usually mid October.

In its first season after sprouting, little brown-eyed Susan grows roots and shoots, but no flower stalks. Then next season, it erupts in flower stalks that grow 3 to 6 feet tall. It spreads very easily from seed, but can also be easily transplanted. Flowers are small, no more than 1.5 inches across. It has a dark brown center with short, bright yellow rays.

There is 1 cultivar available, ‘Prairie Glow’ which is likely a stable mutation. It is true to seed and has ray petals that are 2/3s red, on the inner portion. ‘Prairie Glow’ prefers full sun to light shade, and is adaptable to many soil conditions.

Mostly native to Ozark Mountains of Missouri and Arkansas, this species does well in other areas and in the garden. We like to use this in landscaping because it has a long bloom time, from June to August, and is compact. It does tend to flop a little in open landscapes, but works great in meadow gardens.

The disc flowers (center) are greenish brown, giving it a unique look from other rudbeckias. It reseeds easily, but not as aggressively as R. triloba or R. subtomentosa. Missouri coneflower grows 1 to 2 feet tall and wide. It prefers full to part sun, in well-drained to almost rocky soil.

Often referred to as the poor man’s daisy, this species is a short-lived perennial or annual. It can be found growing natively from the Rocky Mountains eastward to the Atlantic Ocean. You will find it in ditches, field edges, prairies, meadows, and weed patches. It spreads easily by seed and likes full sun to part shade.

Poor man’s daisy grows 1 to 3 feet tall and wide. They bloom from June to September. There are many cultivars selected from mutations and cross-breeding regional genotypes. Some of the cultivars available (which are annuals typically) include:

Found often in filtered woodlands, the cutleaf coneflower really stands out in full sun. The leaves are deeply lobed, hence the cutleaf. It grows in large, wide clumps, 2 to 4 feet across. The flower stalks can grow from 4 to 8 feet tall. Flowers are large, with disc cones that are greenish-yellow.

Natively, cutleaf coneflower grows from the continental divide eastward to the Atlantic Ocean. The large clumps are easy to divide and share with neighbors and other gardeners. They bloom from July to October.

There are several cultivars of cutleaf coneflower available.

This rudbeckia is native from the Missouri River eastward to the Atlantic Ocean. It can be found in glades, meadows, and prairies throughout this region. Growing very well in landscapes, many cultivars have been selected from this species. Sometimes its called brown-eyed Susan, but orange coneflower is used for the natives.

In my own garden, the straight species of Rudbeckia fulgida blooms from July to September, growing 3 feet tall and wide. The clump spreads by rhizomes and grows about 6 inches per year.

‘Goldsturm‘ is a well-known cultivar that has been used in landscapes across North America. It does best in full sun and well-drained soil. ‘Goldsturm’ does have some issues with septoria leaf spot and powdery mildew, which I will touch on later. It grows consistently 2 feet tall and spreads increasingly each year. But, it is an unreliable bloomer, lasting only a few weeks in July.

‘American Gold Rush’ is a newer variety, which is a cultivar from the genotype found in southern Illinois, Rudbeckia fulgida var. deamii. Unlike ‘Goldsturm’, it has resistance to both septoria leaf spot and powdery mildew. It grows 2 to 3 feet tall and wide, and blooms from July to October. It has performed very well in my garden.

I have wondered why this species is not grown as much in landscapes as other rudbeckia. The leaves are the main attraction of this plant, being silvery-green and very attractive. Rudbeckia maxima is native to Texas, Oklahoma, and Louisiana, but is quite adaptable and looks great in my own garden.

Flower stalks rise 4 to 6 feet above the huge, basal leaves, but the flowers are not very showy. And they do not bloom for more than a few weeks from June into July. But they are very tough plants, forming large colonies in poor to well-drained soil, in full sun.

Pests and Diseases of Rudbeckia

Rudbeckias are not tormented by a large number of pests or diseases that some other flower get. But they do have their own issues. Most of the species are not affected by any diseases at all.

Of the many landscape diseases that affect plants, only 2 have any effect on the rudbeckia family.

Septoria leaf spot is caused by a fungus that shows up first in the lower leaves and travels upward by splashing water or rain. The symptoms are large, blocky or angular black spots on the leaves. As the fungus travels up the plant, the lower leaves often crisp up and die. This fungal disease mostly affects the cultivar ‘Goldsturm’. The best preventative is to plant resistant cultivars. (see above under cultivars of R. fulgida).

Powdery mildew is another disease of rudbeckia, affecting plants that are not getting enough air movement around them. This disease mostly attacks species with hairy leaves and stems, such as R. hirta, R. subtomentosa, R. fulgida, and R. triloba. Powdery mildew can be treated with a broad spectrum fungicide. Proper plant placement will also help.

Few damaging insects attack rudbeckia, but there are some insects that can cause damage to the leaves and overall health of the plant.

Lace bugs are a type of plant-sucking insect that feed by sucking the plant juices from the phloem by specialized tubes. Symptoms are first noticed by a speckling of the leaves and tiny insects on the back of the leaves with lots of fecal matter (black specks of poop). Treat with a systemic insecticide such as Rose & Flower Food plus Systemic.

Butterflies including the Gorgone Checkerspot and the Silvery Checkerspot feed on the leaves of various rudbeckia, as well as other members of the aster family. I do not consider these to be a true pest, I am just providing habitat services to pollinators when planting rudbeckias. Let them eat!

The Wavy-Lined Emerald moth is another caterpillar seen on members of the aster family. If you look at the flowers of the rudbeckia, you may see a caterpillar covered with flower petals. These caterpillars use flower petals to hide themselves from predators. Pretty cool eh?

All the black-eyed Susans provide excellent landing places for insects, with their composite flower arrangement (see diagram below).

Therefore, many insects come to get nectar and pollen all while spreading pollen around to help the flowers (see photo below.)

All the rudbeckia can be found growing in native prairies, glades, meadows, or roadsides in North America. There are an abundance of native plants and nativars that will do well when planted with them. The following is a list of some of the species that prefer similar soil and sun conditions as the rudbeckias.

Rudbeckia should be a staple perennial in every North American garden. You can use them in Monarch Waystations, meadow gardens, butterfly gardens, as border plants, in massings, and much more. Add some to your garden, if have not already done so.