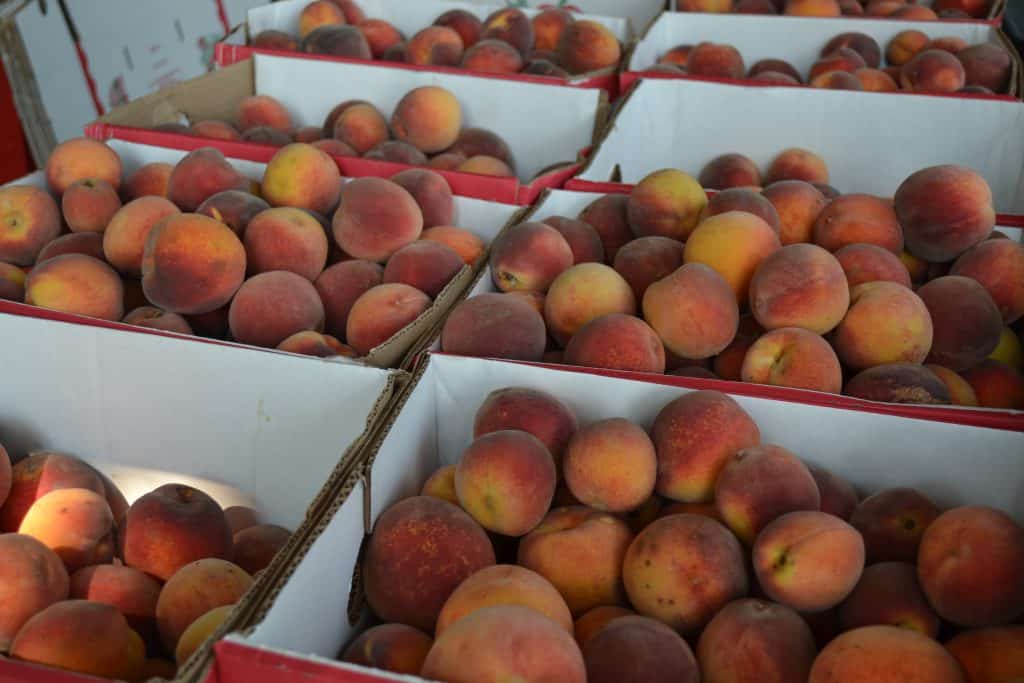 In the last blog I went over all the major problems of pome fruits in the Central Great Plains. Now I am ready to get on to something even juicier, the stone fruits.

What are stone fruits?

Stone fruits include fruits that have a centralized single seed, usually with a very hard shell or coating. These seeds are called stones or pits. Examples of stone fruits include peaches, apricots, cherries, and plums. All of the stone fruits have various degrees of hardiness in the Central Great Plains (Zones 5 to 6b).

Because of this hardiness issue, one of the biggest problems facing stone fruits is late freezes in spring that may kill developing or opening flower buds. This is especially a problem with apricots. I am trialing some apricot/plum crosses in my backyard that are supposed to bloom later. We will see.

Some of the same insects that are problematic with our pome fruits (apples and pears) are also damaging to stone fruits. I will not rehash these insects, but rather link them to my post on Growing Fruits – Problems of Apple and Pears.

The following is a list of the major insect pests of stone fruits in our area.

I like to take an organic and cultural approach to assessing and responding to the damage caused by insects and diseases. This means that I will not recommend any chemical controls unless absolutely necessary. Gardeners and home orchardists have a greater potential for these cultural controls since they are working on a much smaller scale.

Insects such as apple maggot, plum curculio, Japanese beetle, and oblique-banded leaf roller are common fruit tree pests. I have gone over these on previous posts, so click the link in each one to find out about their control.

The adult beetles emerge in late May to June and fly rather blindly to trees to feed. Their flight pattern is strange and they often bump into you while you are in the garden. When they find the tree they are feeding on, they can be quite devastating. In large numbers, chemical treatment may be required.

However, in our area, I rarely see enough to warrant chemical application. Bagging individual fruit will prevent their feeding on peaches. If you are like me though, and have multiple fruit trees to manage, you may not have enough time to bag all your fruit. Planting your trees in a fruit tree guild will allow natural enemies of beetles to control most of them.

This moth is one of the more destructive pests, as it feeds on peach and nectarine, as well as cherry, apple, apricot, and more. It was introduced into the United States in 1913 and now is found throughout the temperate world, wherever fruit is grown.

The moth itself is small and brown, very common looking. It overwinters as a pupa in a silken cocoon in bark crevices or leaf litter. Cleaning up leaf litter in the fall and burning it is a good practice for all orchardists.

In spring, when warmer days arrive, the moth pupates and emerges looking to mate. After mating, the female moth can lay up to 200 eggs on the leaf surface. Hatching takes 5 to 21 days, dependent on temperature. Once hatched, the larvae will either burrow into twig ends or into fruit.

Flagging of young shoots is an indication of possible Oriental fruit moth (OFM). When you observe a single leaf shoot wilted at the end of the stem, it means that the larva has recently entered the shoot. Clipping those shoots and burning or dropping in a bucket of soapy water overnight is advised.

In the fruit, the larvae burrow a winding path towards the center, eating as they go. Unlike codling moth, the larvae do not push their excrement out of the entry hole, but make a new hole out when they are done. It has been found that mating disruption with pheremone traps can be good way to reduce OFM populations before egg laying.

Also, there are several parasitoid wasps which will attack the developing larva of the OFM. Fruit tree guilds will help attract beneficials such as these parasitoids to your fruit trees.

This is a recently introduced fly species from Asia has finally made it out to the Central Great Plains region and we must act now. Spotted wing drosophila (SWD) is member of the vinegar or fruit flies group and attacks healthy fruit of peaches, plums, and cherries. It also affects bush fruits like blueberries, raspberries, and blackberries.

The fly lays its eggs on the ripening fruit and the hatched larvae burrows into fruit. As they begin to feed they often release a bacterium that causes fruit rot. Because of hatching timing, often picked fruit that looks good will begin to deteriorate after picking. After feeding, the larvae leaves the fruit to pupate.

SWD can complete its life cycle in 7 days and there are multiple generations per year. For larger orchard, chemical sprays are a necessity to preventing entire crop loss. In your home orchard, fruit loss can be prevented by covering trees with ripening fruit with insect netting or floating row covers. This also helps with prevention of Japanese beetle and Green June beetle.

Where covering the trees is not feasible, harvest and process fruit as soon as possible. Pick up and destroy fallen and rotten fruit by grinding into a slurry and letting sit in the sun for a couple days. Once the slurry has begun to ferment or rot, mix it into your compost pile. Another option is to give all rotten or fallen fruit to your chickens, if you have them. They will eat the fruit and the larvae of the fly.

This borer is a type of clear-winged moth. Peach tree borers lay eggs on the surface on tree trunks of peach, cherry, and plum trees in May and June. The larvae bore into the trunk and feed on the cambium layer, disrupting the flow of sugars and nutrients to the roots. If not prevented, they can kill trees.

The best method for preventing peach tree borers in the home orchard is to cover the trunk with tree wrap and spread with banding gum to trap and kill the moths. This should be done before adult mating in May and June. One coat of banding gum should last the entire season and prevent other crawling caterpillars from getting on the tree.

While the list of diseases for stone fruits is shorter than that of pome fruits, there are some that have only one treatment option and time, which makes them more difficult to control. The following list includes the major diseases of stone fruits for the Central Great Plains region.

Controlling the diseases that affect stone fruits is mostly about timing and sanitation. Keeping both your tools and your landscape clean of potential problems will result in less disease for your fruit trees.

This fungal disease, if left unchecked, can grow to destroy your plum or cherry trees. Black knot overwinters as dark brown to black colored galls on the branches of susceptible trees. In the spring, fungal spores are released after rainfall and are carried by wind or rain to new branches.

The infection of new branches can take up to 2 years to complete. If left alone, the galls can completely girdle branches and kill them. It is very unsightly and the spores can stain clothing.

To remove black knot prune from the tree when the temperature is below freezing, in the winter months. This will prevent the fungus from releasing spores. Place the pruned parts into a trash bag and remove to the trash.

Another method to help prevent infection from black knot is to plant tolerant cultivars of plums and cherries. Also, if there are native cherries or plums nearby, the infection will likely come from them. So plant your fruit as far from them as possible.

This fungal disease is a very big problem in peaches and nectarines. The fungus causes the leaf cells to multiply quickly and randomly, resulting in twisted, puckered leaf margins and leaves.

The fungal spores overwinter in bark crevices and buds. Rain splashes the spores onto the buds at bud swell and a new infection starts. Depending on severity of the infection, the fungus may weaken the tree enough to abort the fruit set. If peach leaf curl is not treated for several years, the tree could die.

It is important to spray in late fall/winter on susceptible trees with a copper based fungicide, neem oil, or lime sulfur to prevent infection. Weather patterns in our region may force buds to swell in February or March thaws, making early spring sprays invalid.

There are also a few varieties that are resistant to peach leaf curl, but may still need sprayed the first 2 to 3 years in the ground. These include:

There is also a slight possibility that isolation in a wooded setting may prevent infection. I have an 8 year old peach tree that has never had peach leaf curl. It is the only one in my yard and was a seedling from a peach pit, no cultivar known.

This fungal infection attacks fruit, flowers, and shoots of all stone fruits. However, it is most prevalent in our area on peaches, cherries, and apricots. The fungus overwinters in mummified fruit on the ground or in cankers on branchlets. In spring, the fungal bodies release spores which are carried by wind to damaged fruit, flowers, or twigs. Fruit that has been damaged by hail, insects, or mechanical operations (pruning, thinning) are susceptible to infection.

The most important step in reducing the amount of infected fruit is sanitation. Remove all infected fruit from the tree or when it falls and throw in the trash (DO NOT COMPOST). Be sure to also cleanup all pruned branches and twigs and burn immediately.

This diseases mainly affects cherry, apricot, and peach. Bacterial canker is a bacterium that attacks weakened trees. Cankers develop on individual branches or along the trunk and are known by oozing and gumming of sap. Branches may die individually or the whole tree may go up. There is no recommended chemical treatment.

Bacterial cankers may be prevented by ensuring that your tree is as healthy as you can make it. Do this be keeping the area around the tree clean and mulched, watering the tree when necessary, and protecting the tree from other diseases and insects. Planting in a fruit tree guild will help keep them healthy.

Growing stone fruits can be daunting to many home gardeners, but the reward is worth the effort. I look at biting into a juicy, tree ripened peach comparable to my view of heaven. The destination is worth the trouble, time, and effort to get there.