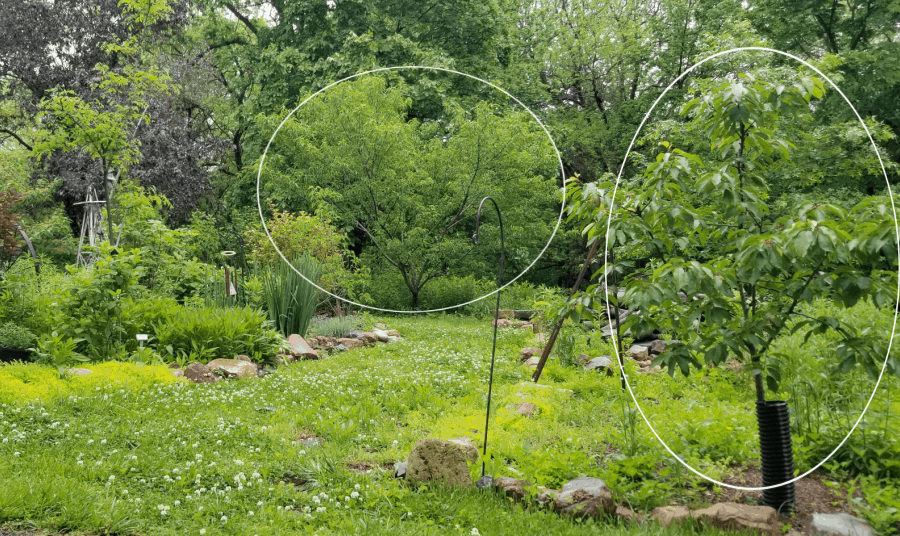 When I was first approached to write on this subject, earlier in 2020, I admit, I really had no idea what a fruit tree guild was. However, once I looked into it, I discovered that I was aware of the concept, if not the actual idea. I have been planting my gardens for maximum biodiversity to help prevent pests and encourage pollinators, which is more or less what a guild is.

What is a fruit tree guild?

By definition, a guild is “an association of people for mutual aid or the pursuit of a common goal”. When applied to growing fruit trees, it has been termed Companion planting on steroids.

To guild is to put together a group of plants that mutually benefit each other. The traits needed in specific plants for a well-planned guild are:

Follow the above guidelines when choosing plants for your guild.

What are the benefits of a fruit tree guild?

The reason we plant for greater biodiversity in our gardens is to grow crops and flowers in a way where we need as few chemical inputs as possible. We are trying to work with God and His creation to better serve ourselves. Benefits that I have seen since planting my landscape for biodiversity:

Where do I start when designing a fruit tree guild?

Start with what primary crops you want to grow. These are generally fruit trees and bushes. If you are like me, you will try to have as much variety in fruits as possible. Make a list of the fruits you would like to grow in your guild.

Nut trees and bushes can also be included in your list of primary crops.

Choosing a Site for Your Fruit Tree Guild

I know, you should have the site before the plants. Do not put the cart before the horse, right? Well, even if you do not have the site, you can plan until you get the site.

A fruit tree guild needs very little space. You can put a guild in an area as small as 10 feet by 10 feet. As long as it is big enough in the air to accommodate a full grown fruit or nut tree, bushes, and a groundcover layer.

What are the layers of a fruit tree guild?

When you are planning the site for your guild, it is best to know the 8 layers of the food forest ecosystem, aka the fruit tree guild. I have seen some calling out only 7 layers, but really, there are 8. What are they?

When putting things in all these various layers, you can mix and match whatever you want in 4, 5, and 6 as most of these will be short term plantings. Layers 1, 2, and 3 are long-term plantings and should be for their site as much as possible.

Should I draw a plan for my guild?

When planning this out, you can do a simple sketch, a planned drawing, or keep it all in your head. I have yet to draw out anything in my own gardens, I keep it fixed firmly in my head.

It might be easier to start with a small, circular design centered around a tree and copy it for all future locations. The below photo is an example.

What specific plants should I add to my guild?

Many of the plants you could select for your guild are multipurpose plants. They often perform multiple functions such as fixing nitrogen, pulling nutrients up from lower soil layers, attracting beneficials and pollinators, or providing a mulch layer. The following chart shows 20 plants and their benefits to the fruit tree guild. These plants fit into the shrub, herbaceous, and groundcover layers.

Really though, you can mix and match almost anything into your guild. However, I like my landscape to be both pretty and functional, so I add flowers and plants that look good together in a cohesive way.

I also tend to lean heavily on natives to my ecoregion. You should have at least 60% natives in your home landscape. Otherwise you will have a lower amount of benefit from pollinators, beneficial insects, and birds.

I have my site selected and my design done, what next?

The next step in putting together your fruit tree guild is to prepare the soil. Preparing the soil before planting will ensure that the trees and other plants get off the a good start. Even if you are planning to use the guild to build soil nutrients, it is best to be prepared to add something at the beginning.

Follow these steps to prepare the site for planting:

When is the Best Time to Plant My Fruit Tree Guild?

Plan to begin making your beds ready to be planted in early autumn, in the months of September and October. Order plants to be delivered at this time, if ordering. Autumn is the best time to plant trees, shrubs, and perennials because the soil is warmer and usually just right for moisture. Also, at autumn, plants are have mostly stopped growing tops and are putting energy into root growth for winter.

Even after planting in autumn, plants keep building soil web systems with their roots, mycelium, and bacteria, preparing for the next season’s growth.

If you have a sketch or design made, follow it to place your plants in the guild. Pull back the mulch/manure layer and dig the holes for each plant. Holes should be the size of the root ball of each plant, no bigger. If your plants are in pots, remove the pots and tease the roots out with your fingers.

If your plants arrived bareroot, make a mound of soil in the hole and spread the roots over it, making sure the crown of the plant or the graft is above the soil surface line. Fill the hole back in with the soil that came out of it and tamp gently with your hands (DO NOT stomp on the soil).

Once the plants are in the ground and the soil filled back in, water the new plantings daily with a sprinkler for 20 minutes or a soaker hose for 1 hour. After the first watering, replace the mulch/manure mixture back around the plants. Continue watering daily for 1 week, then 2 times a week for 4 weeks.

Caring for Your Fruit Tree Guild During the First Year

There are several maintenance practices that must be done during the first growing season of your guild. Follow these practices to maintain the health of the guild.

What Kind of Pollinators and Beneficials Should I Begin to See?

Since planting for diversity at my home, some 7 years ago, I have seen a big increase in pollinators and beneficial insects on a yearly basis. I try to photograph and document as many of these as possible. Even if you are growing on a very small scale, you will see more insects than you did before.

Bees I have Seen

Butterflies I Have Seen

I have seen 54 species of butterflies on my 5 acre property in the past 7 years. Of these, I have seen 18 species of skippers. My tope 12 species are listed below.

Moths I have Seen

I have documented some 180 species of moths in the last 7 years on my property. These are my top 20.

Other Pollinators and Beneficials I have Seen

The following list includes 18 insects that I was very excited to see working in my landscape.

Spiders I have Seen

One thing that many do not think about showing up when biodiversity increases is spiders and other arachnids. I use to hate spiders, but now I love them (as long as they stay outside).

What are the Benefits of Nitrogen-Fixing Plants?

How do Plants Fix Nitrogen?

What actually happens is symbiotic relationship between bacteria and the roots of certain plants, mostly legumes. The bacteria in the soil takes gaseous nitrogen from air pockets between soil particles and feeds the nitrogen into the roots of the plant. The bacteria gets carbohydrates (sugars) from the plant in return.

Examples of Nitrogen-Fixing Plants for the Fruit Tree Guild

While there are a variety of legumes across the world, many would not do well out side of their ecoregions, and certainly would not work in the Central Great Plains (Zones 5 to 6b). But there are many native legumes and some non-legume nitrogen fixers that are perfect for our fruit tree guilds.

I will not include any canopy trees in this list, as we want our tallest trees to be fruit or nut bearing trees.

Why is Comfrey so Important in the Fruit Tree Guild?

Many people when researching fruit tree guilds hear a lot about comfrey. Comfrey is an herbaceous, perennial herb. It grows with both lateral roots and deep taproots. The taproots of the comfrey plant may extend 10 to 15 feet into the ground. Going that deep allows the comfrey plant to access nutrients that are not often reached by other plants.

Comfrey plants pull up the nutrients from lower soil levels to their leaves. These leaves can be chopped off monthly and used as fertilizers in the garden or guild, or given to chickens or geese to eat.

Comfrey also has some medicinal properties.

What is the Fungal or Mycelium Layer in the Guild?

The fungal layer exists among the root layer of the food forest, but is also considered separate from it. It has been discovered that nearly all plants’ roots are intertwined with fungal “roots” also known as mycelium. This symbiotic relationship benefits both the plants and the fungi.

There are thousands of known fungi in the world, and many more yet to be discovered. While some of the fungi are plant pathogens, such as powdery mildew, anthracnose, and cedar-apple rust, there are even more than play an important part in the take-up of plant nutrients. Fungi also help plants by breaking down dead materials and recycling them back into the leaf litter or the soil itself.

Fungi help the ecosystem further by being food sources themselves to mammals, some insects, and others, becoming a part of the food chain. Still others attach themselves to insects and “eat” the insect from the inside out. We may never know the true extent of how much fungi help us.

Some Fungi You May See In Your Fruit Tree Guild

While most of the work of the fungi is in the mycelium strands working below the surface of the soil, the fruiting structures are indicators that work is going on. Look for some of these fungal bodies among the mulch/manure layer of your guild.

We never stop learning about the subjects that really matter to us. When looking to plan my first fruit tree guild, I discovered I already had one. The importance of increasing plant diversity in one’s landscape is shown by the benefits brought in by increased diversity of fauna.

And do not forget about the mycelium!