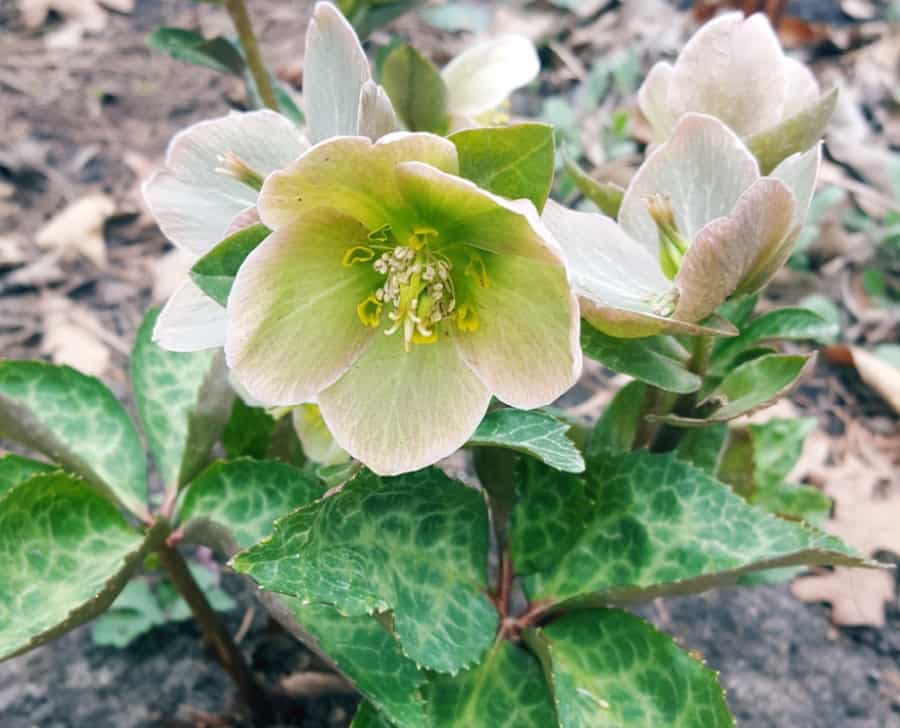 The Lenten rose is not a rose at all, but rather a member of the buttercup family. This family also includes such plants as anemones, clematis, and delphiniums. Native to southern and central Europe, Lenten roses have long been a part of traditions around the Lenten period. Lent is the period of 40 days from Ash Wednesday to the Saturday before Easter.

The Lenten rose, Helleborus orientalis, is one of 15 species of Hellebores. Many of these species have been crossed together in recent years to produce new colors, cultivars, and bloom styles.

The 2005 Perennial Plant of the Year, the Lenten rose is a long lived perennial. The one in my grandmother’s garden in north Central Kansas has been the for over 30 years.

Where should I plant a Lenten Rose?

Lenten roses should be planted in a part shade location, away from late afternoon sun. I have my own Lenten rose growing along the east side of my house in my shade garden.

The Lenten rose grows in Zones 4 to 7. They begin sprouting flowers in early March and the blooms last for several weeks, throughout the period of Lent. They prefer slightly alkaline soil, but are also tolerant of acidity, as long as it is not too low.

As a bonus, Lenten roses are tolerant of juglone, the chemical released by black walnut trees. So if you are having trouble with a shady spot under a black walnut, grow Lenten roses.

Does the Lenten Rose have any pest or disease problems?

I have never experienced any issues with it in my garden. It does not have any insect attacker, nor are there diseases on it. They may be subject to root rot if they are in too wet of a soil, but nothing else bothers them.

However, newly planted Lenten roses can take several years to make roots before blooming. One of my customers has a Lenten rose that has been in the ground for 4 years and has not yet bloomed. But once they are established, they will start spreading slowly through the garden.

What are some good companion plants for Lenten Rose?

Lenten roses are best planted in the shade garden, so shade garden companion plants are best used around them. In my own garden I have hostas, coral bells, bleeding hearts, columbines, and brunnera around and near mine.

It may be best to add some ferns or other leafy shade plants nearby to take the spotlight when the heat of summer comes in. Sometimes, the dark green leaves fade or scorch a bit in July and August.

The following is a list of good companion perennials for the Lenten Rose.

If your local nursery does not carry one, ask them to find some for you or look to online nurseries such as Grimm’s Gardens. Mail-order nurseries also carry a variety of Hellebores. Some varieties and cultivars are less hardy or less tough in warmer climates than the Lenten rose.

When buying plants from the nursery, check the roots by popping the plant from the pot. If the roots are brown or there is a rotten or decaying smell, do not buy it, it has been over-watered. Leaves should be leathery and dark green in color, with not spots or mold on them.

When choosing cultivars, and there are a lot now, look for ones in your hardiness zone. Always have a place in mind of where to put them before buying.

The Lenten rose blooming in early spring represents a season of renewal, refocus, and reflection. Plant these long lived perennials in fall or spring and let them be a reminder of the season of renewal.