Skip to content
Home > Posts > Spiders in the Garden 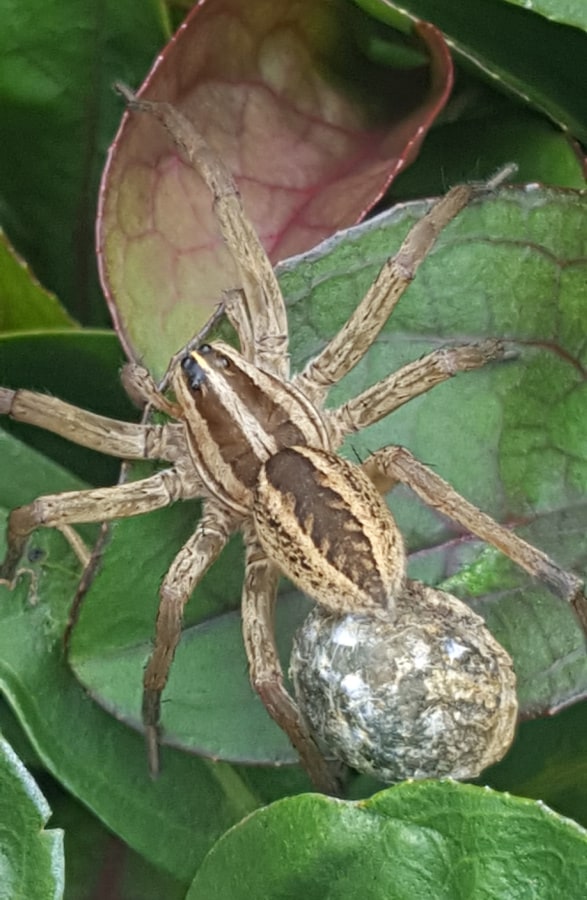 When I was young, I had a horrifying experience with a spider inside the house. A brown recluse crawled down my face in the bathtub. It took me more than 15 years to get over my fear of spiders, both inside and out. Now though, I love spiders (with the exception of house dwellers and tarantulas). Finding spiders in the garden makes me happy, mainly because I know how important they are to the ecosystem.

What may amaze us gardeners to know is that nearly every spider we encounter has venom of some kind. But only the black widows and brown recluse have enough venom to be dangerous to humans. And we typically only find them in the house, garage, woodpiles, or barn. The variety of spiders in the garden might also amaze you; there are at least 500 species in Kansas.

Now, I know that spiders are considered a creepy-crawly, similar in fear to snakes to many of us, but most are relatively harmless, and highly beneficial, just like snakes. Spiders consume an enormous amount of insects, both pests and beneficials, and are also food for other animals and insects. With more than 500 species to look at, I am going to focus on family groups of spiders.

These are some of the most beautiful and most commonly seen spiders in the garden. Every year, I field questions on the different orbweavers that abound in the garden and forest. In late summer in particular, orbweavers stretch their webs across paths and porches, between trees and fences, trying to catch a meal before laying eggs for winter. A typical orbweaver life cycle starts as hatching eggs in spring, molting and maturing by midsummer, mating, then laying eggs before winter. They overwinter as egg sacs suspended in webbing, under leaves, in bark crevices, or in firewood or similar places.

There are 63 species of orbweaving spiders known to be in Kansas. But because of our varied habitats and central location, it is possible to find rare strays in differing habitats. It may take an avid naturalist years to find even half of those 63 orbweavers. I have identified 10 between varying habitats in Central, North Central, and Eastern Kansas.

This is perhaps the most well known spider in Kansas, or even any garden situation throughout the Eastern United States, as well as the West Coast. As our largest orbweaver, and perhaps the most striking, with yellow and black, many think it is scary looking. But they are so beautiful when capturing moths, flies, bugs, even other spiders in their large webs.

I have coworkers and customers who remark that they see this spider most often around their tomato plants. The reason for this may be because tomatoes have so many pest issues, that the spider sees the potential for food greater there. But in reality, yellow garden spiders spin their unique webs in many parts of the garden.

Similar to the yellow garden spider is the banded garden spider. It is slightly smaller, with parallel bands of yellow, gray, and black on its abdomen. I see it more often in wild places, such as along lakeshores and woodland edges, but it can be seen in gardens as well.

Perhaps my favorite spiders are the jumping spiders. The only spider I have been known to leave alone in the house is a tan jumping spider that got in one day. There are at least 70 species of jumping spider in Kansas, 14 of which I have identified. Many are quite colorful and fun to watch. These are often used for photoshoots on instagram and other places, because of their eye arrangement and cute close-ups.

I see many of these spider yearly around the garden and house. Indeed, they seem to live near the porch lights which I leave on for hours while studying moths. I also see them regularly around the doors and windows, catching insects by pouncing, rather than building webs.

The brilliant jumping spider is showy with a black head and thorax, and a red abdomen with a black stripe. I see them most often among the native plants of my meadow garden, hunting moths, butterflies, and other insects. It is really a fun time watching these spiders hunting among the flowers.

These are the spiders that typically scare most people, even though their venom is mild in comparison to a black widow spider. There are many different types of wolf spiders, and many look similar, so that identification is often difficult. For instance, the rabid wolf spider greatly resembles the American grass spider, though only one is a wolf spider.

If it were not for their colorful bodies, these would actually look like miniature crabs. Crab spiders do not spin webs, but usually wait for prey by sitting on flowers. Some even mimic the flower petal color, adding camouflage to their effectiveness. It may seem bad to gardeners, to have a spider waiting for a favored butterfly or bee on a flower, but it is all part of nature.

There are different kinds of crab spiders. Some, called running crab spiders, run fast to track down prey. Others are ground crab spiders that hunt from the ground for ground beetles, ants, bees, and other crawling insects. Flower crab spiders are the most colorful of all the crab spiders and mimic flower colors.

Insects that Eat Spiders in the Garden

While certainly important predators in the garden, a few other insects routinely eat them too. Ants and wasps are the most well known for eating them. Here in the Central Great Plains, I have observed 3 species of spider wasps actively moving large, paralyzed spiders to their nests to lay eggs in. The wasp lays an egg inside the spider’s body, where it hatches and eats the spider alive from within.

Mud daubers and other wasps also paralyze spiders with their venom and bring them into their nests for their larvae to feed on after hatching.

Spiders are a common beneficial in the garden. The above spiders are but a small selection of the many hundreds of spiders you may see while spending time in your garden. Enjoy them, for they are helping you with pest problems and protecting your fruit and vegetables.