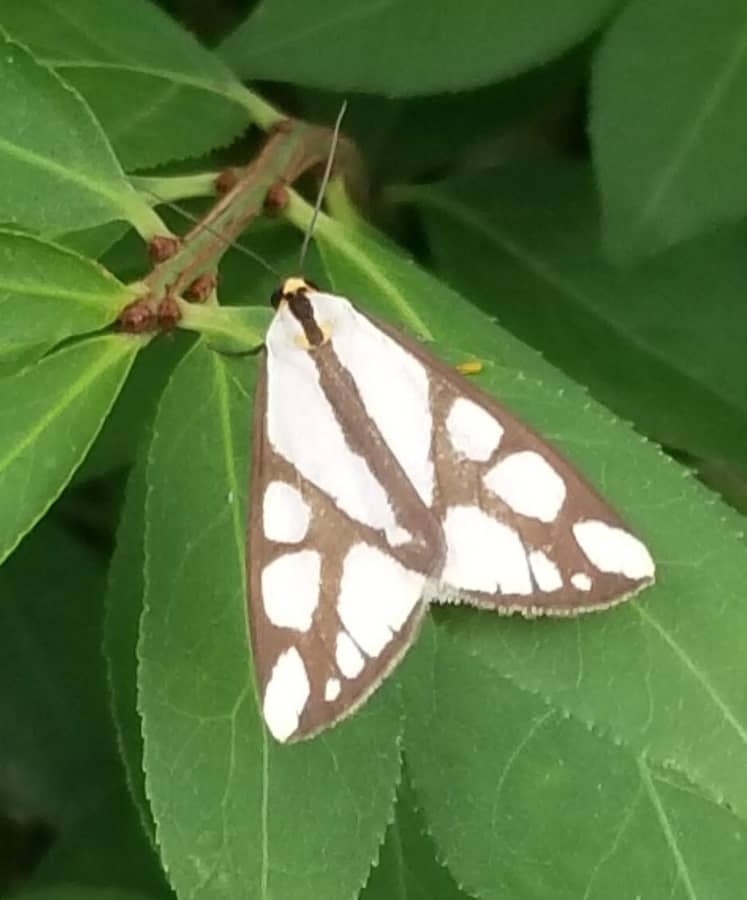 2021 was the year of the moths, for me. I have always been fascinated by insects in general, but in 2021 I studied moths more than any other insect. It was truly an eye-opening experience. Most gardeners I talk to know very little about the enormous variety of insects surrounding them, including the some 11,000 species of moths out there.

Here, in Northeast Kansas, there is some overlap between species of Kansas, Nebraska, and Missouri. So, I can search for several hundred to 1000 species just in my region. So far, I have identified some 320 species. That is a small number compared to the thousands which are out there. And they eat more than even I realized.

Moth larvae feed on a large variety of things, including plants, dead leaves, grains, fibers, and even other insects. If it was not for birds eating them, moth caterpillars would overwhelm our landscapes in a few days. I am very thankful for the birds.

Mothing – What is It?

When I first heard about a chance to go mothing on the Tallgrass Prairie by Strong City, I wondered what a mothing was? I did not go, but found out all about it. Mothing is the process of observing moths with a lighted screen or cloth, put up at night. For a reason yet unknown to entomologists, moths are attracted to lights. I think they likely use stars to navigate and are more attracted to light or white colored flowers for pollination. But who knows?

I did my own mothing in the back and front gardens of my house. In back, I lit up the wall of our garage (painted light gray) with various lights, including halogen, black light, and LED. The black light attracted the most variety of moths over several hours, while the halogen attracted the most numbers.

In the front yard I lit up a white sheet with a halogen light, and attracted many of the same, though some different, moths as the back yard. Also, at various points in the summer and early fall, I left on porch lights at home and at my mother’s house to see what moths would come. My wife could tell you how excited I get whenever I see a moth I do not know yet.

While moths are listed as pollinators by all competent supporters of pollination, they are mostly poor pollinators (of daytime flowers). There are some specialty moths which have longer tongues or probiscises, who do pollinate during the day, but most either pollinate at night, or not at all. Examples of some good pollinators are pictured below.

How to tell the difference between a moth and butterfly

Moths and butterflies both belong to the order Lepidoptera, which means they have four broad wings with scales and have larvae as caterpillars. Butterflies are considered diurnal, meaning they fly during the day, while most moths are nocturnal. Moths have feathery or comb-like antennae, while butterflies have club-tipped antennae. Also, most butterflies fold their wings up and back while at rest, though this is not always the case. Once you can identify the actual species, you will know which is which by just looking.

Moths that Feed on Trees and Shrubs

These are the most interesting to me, mainly because trees are such a big part of my life. Becoming an arborist, and training to take care of trees has led me down a path which intertwines with insects, diseases, and other tree lore. There are a wide variety of tree and shrub feeding moths, and many of them overlap on the kinds of trees they eat.

Moths that Feed on Perennials and Annuals

These also overlap on many of the species they eat, although many of them are specialists within a family of plants. For example, some moths eat only members of the Aster Family, which is comprised of perennials and annuals such as aster, sunflower, joe pye weed, goldenrod, and more. Others feed across plant families. Some are pests of forage or grain crops. And others still you may never see feeding because they only do it at night.

Moths that Feed on Leaf Litter

Called litter moths, I had no idea these even existed until 2021. I always thought that leaves were broken down only by bacteria, worms, and fungi in and on the soil. But now I know that moth caterpillars work at it too.

Moths That Feed on Grasses

Many of these are pests to grain crops like wheat and corn. But many others feed on a wide variety of grasses, including turf and pasture grass. It is important to learn which is which before any management is practiced.

Moths That Feed on Unknowns

Wait, what? Yes, I learned that there are many moths which we have no idea what they eat. I do my best to discover what each moth eats, but there are just too many that entomologists and amateurs have no idea about.

Moths are interesting insects that I may never know enough about. But I will continue to learn about the many hundreds of moths in the Central Great Plains, and surrounding areas, as well as the eastern half of the United States.

2 thoughts on “Moths – An Introduction”