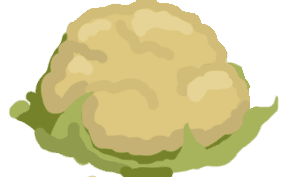 Cauliflower is a cool season vegetable that is best planted when the temperatures rise to about seventy degrees. This happens in Kansas around the end of March. Start your own seed near the beginning of February. If you were late planting seed, stop by Grimm’s Gardens and pick up a small plant ready for transplant.

Cauliflower is rich in vitamin C as well as vitamin B-6. This vegetable is good for your digestive system containing plenty of dietary fiber. If you spend very much time researching cauliflower, you will find attributes such as, ‘anti-inflammatory,’ ‘detox,’ and ‘antioxidant.’ While many a youngster has complained about this veggie, there are several ways to disguise it or doctor it up.

First, the longer you cook the cauliflower, the softer it gets and the more sulfur scent will be released into the air. Both the mushy texture and scent can be unappealing to many so try to cook it lightly until it is tender crisp.

One of the new and popular uses for cauliflower is pizza crust. This is appealing to those who are trying the low carb diet or working on being gluten free. It is a pretty simple way to alter a family favorite and add some healthier elements. If your meat and potatoes loving spouse misses the traditional pizza crust, let him know that you were considering making cauliflower steak, but thought that cauliflower pizza crust would go over better!

When pureed, it can make a great dip. There are all kinds of dip recipes using cauliflower. The cauliflower is used as the base ingredient, much like sour cream would be used. Cut it and add to your Wisconsin cheddar soup, or into a casserole. Let’s not forget the most obvious options such as fresh dipped in dressing or steamed and mixed with cheese.