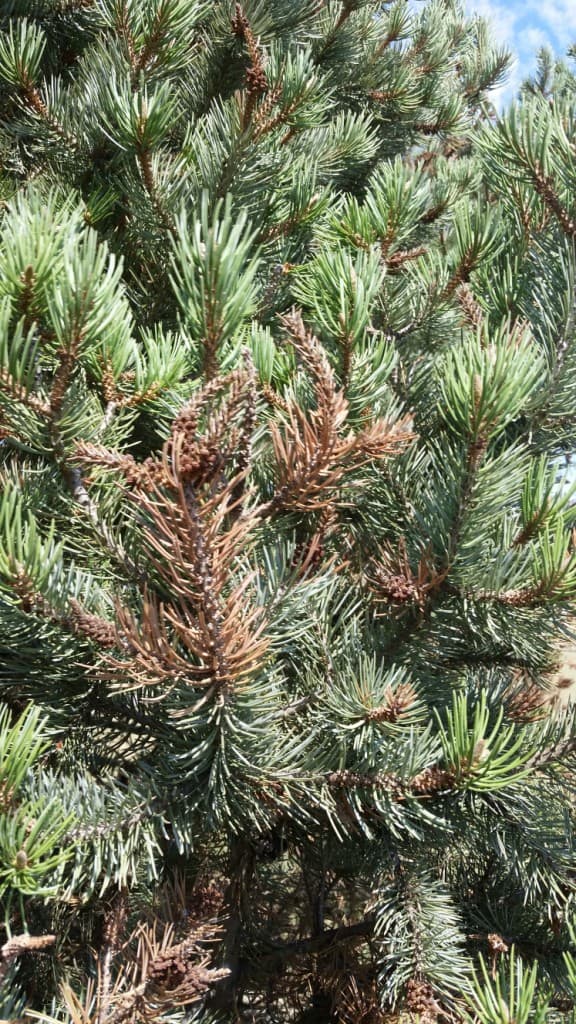 There are several common diseases that attack Pine trees in the Mid-West.  Perhaps the most well-known is Pine Wilt; however there are a few others that are more common but less severe.  In this article, we will cover the basic signs and symptoms of these problems and give some ideas on the best course of action after diagnosing the problem.  We will cover Pine Wilt, Dothistroma Needle Blight, Pine Tip Blight, and Natural Needle Drop.

Pine Wilt is perhaps the most complicated of the diseases we will cover today.  Its life cycle includes several insects, a nematode, a fungi, and of course a pine tree.  To start, we will look at an adult pine sawyer beetle that is carrying the pinewood nematode inside its gut.  This beetle is attracted to healthy pines to feed on young shoots.  During the feeding process, the nematodes that it is carrying leave the beetle and move into the pine.  These critters then multiply in the water and nutrient canals in the tree.  They then clog these pores and restrict water movement in the tree.  It is this lack of water movement that finally kills the tree.  As such, you will commonly notice a slight yellowing or wilting of the tree in the Spring, and then sudden death of the whole tree in the Summer when it is hot and the tree really needs all the water it can get.

One of the biggest symptoms of Pine Wilt compared to the other common diseases is the sudden nature of the death.  An otherwise healthy tree can entirely die within a year.  So what do we do?  Well, let’s look at the rest of the life cycle of this disease to determine the best action.

After the tree dies, blue-stain fungus invades.  Next, pine sawyer beetles lay their eggs in the wood of these dead trees.  The young pine sawyer larva and the pinewood nematodes both feed on this blue stain fungus. This is the point where new pine sawyer beetles become infected with the nematode and the life cycle starts again with an infected adult beetle, feeding on young branches.

Because the infection stage begins with the dead tree, it is essential to properly remove any dead pine trees immediately.  The best option is to burn the tree.  Avoid saving it for firewood.  It is also possible to chip the tree and use it as mulch, but the best option is still to burn the tree.  When choosing pine trees to plant, avoid Scots pine as it is the most susceptible to the pinewood nematode.

This very common disease affects Austrian and ponderosa pines.  While these trees are very common in wind breaks, the good news is that this is a very slow progressing disease.  Also there are some chemical controls to help prevent or reduce this disease.

Dothistroma is a fungus that infects pine needles. This fungus spreads during the growing season from water splashing on infected needles and carrying spores to nearby needles.  To diagnose this disease, look for needles that are brown at the tip and green at the base of the needle.  Commonly you will find the two year old needles affected before new needles, as the new growth is not susceptible until midsummer.  Also look for red to dark brown bands (or spots) on the needles to indicate Dothistroma needle blight.  Environmental stresses, such as drought, can also cause the tips of needles to brown, but there you will not have the red bands on the needles and the browning will be all the same length.

To best control Dothistroma needle blight, apply two rounds of fungicide in the Spring; one in mid-May and one in mid-June.  Be sure to completely cover the whole tree with the fungicide and treat any neighboring pine trees as a preventative measure.  This will need to be repeated for several years to get this disease under control.

Tip blight is also caused by a fungus and is quite common. The good news is that this is a very slow progressing disease and usually doesn’t affect trees until they are 20 years old or more.  The most susceptible trees are Austrian, ponderosa, Scots, and mugo pines.

This is a fairly easy disease to diagnose. Look for new growth to start to emerge and then die while the new needles are still small.  The other significant sign of pine tip blight is the presence of spores, called pycnidia, on the top scales of 2 year old cones.  These are the pinecones that are weathered and grey rather than a fresh light brown color.  These black dots on the pinecones will be the most certain diagnostic tool.

So what can you do?  First, be sure to keep your tree watered and fertilized to minimize other stresses.  Then consider chemical control.  Fungicides need to be applied when the new needles are beginning to emerge.  This is usually sometime near the third week in April.  Spray the tree in 10-14 day intervals for two or three applications.  If it is a wet Spring, consider doing more applications as compared to a dry Spring.

All pines drop their needles after a certain number of years.  If you notice the area of needles that are deepest into the tree turning brown, do not panic.  Every year the oldest set of needles will fall.  The concern with the above diseases is that the younger needles are being affected; those needles which should provide the tree with nutrients for another 2-4 years.