Skip to content
Home > Posts > Swallowtail Butterflies in Your Garden 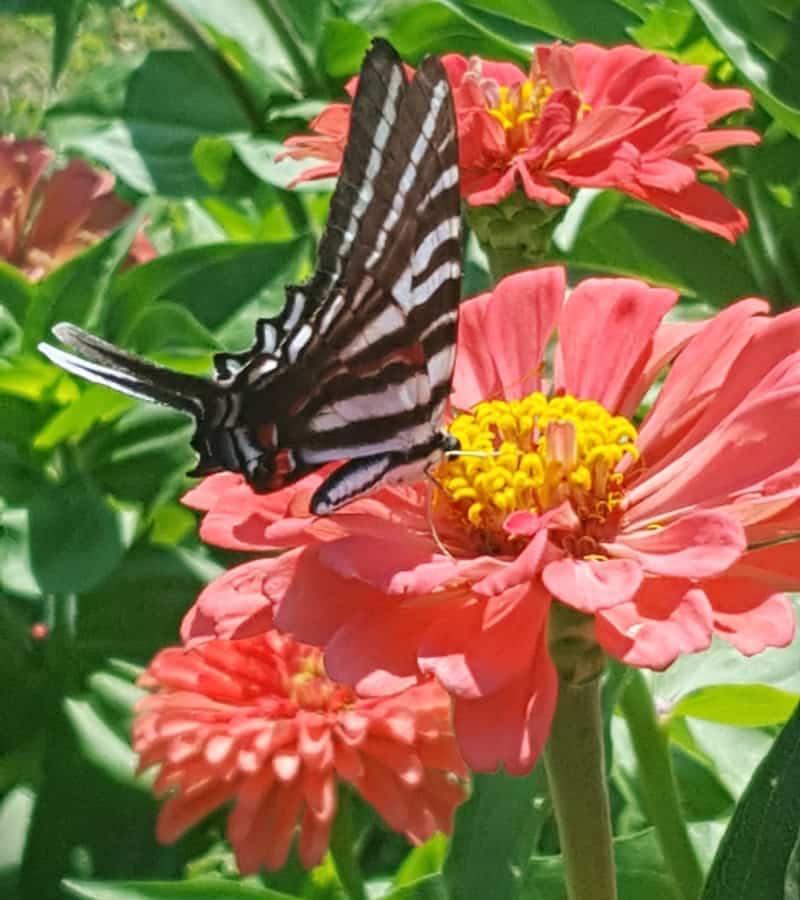 The journey in the garden is a lifelong one. You do not just get started and boom!, you are done. No, gardening is a process. And in that process we learn quickly which butterflies are attracted by which plant. I have watched butterflies for year, though I am not a professional entomologist. But I observe, and from my observations, I do trials, and I make conclusions.

One of the key features in identifying the larvae of swallowtail butterflies is a structure called an osmeterium. This defensive structure is located on the front of the caterpillar, just to the back of the “head”. The osmeterium is usually orange or red, and resembles a snake’s tongue. When the caterpillar feels threatened, it will extend the osmeterium and try to scare away the predator.

The eastern tiger swallowtail is my favorite of all the swallowtail butterflies. Perhaps is is because it was the first one I saw when spending time in my grandma’s garden. Or perhaps I just love seeing them among my flowers in my own gardens. No matter the reason, they are first on my list. Now, when we are discussing how to attract butterflies to the garden, we need to know more than just what nectar plants to provide. We also need to know what they lay their eggs on.

Identifying these butterflies can be tricky for someone who has not seen them before. They can also be difficult to distinguish between the black swallowtail and pipevine swallowtail, for those who do not look closely. However, if you see a large yellow and black butterfly, with blue on top of the hindwing, it is a tiger swallowtail. They also have a black form, which has a single row of yellow dots along the wing edges, while the black swallowtail has a double row.

Caterpillars have several instars, or stages, and can also be varying colors. Early instars look like bird droppings, while later instars are large and green, with a yellow ring around the head, and eye spots behind the head. Just before pupating, the larva turns brownish.

Eastern tiger swallowtails are more generalist feeders than many of the other swallowtail butterflies, feeding on several different woody plants. The following list includes several known plants that are hosts for the caterpillars.

What Eastern Tiger Swallowtails Nectar On

Within the landscape, I am sure you have seen Eastern tigers on the above mentioned garden phlox. But what else do these magnificent butterflies feed on in their adult stage? Because they emerge as adults in early spring, then lay eggs, pupate, and have more adults (2 generations) in the same year, you will need a variety of nectar plants to keep them coming.

The following list are the main plants I have seen these butterflies nectaring on in mine and other gardens.

The adult black swallowtail butterfly is large, but smaller than the Eastern tiger swallowtail. They are mainly black or very dark blue, with 2 rows of distinct yellow spots along the upper and hindwing edges. On both male and female, is a band of blue markings between the spots on the hindwings.

Caterpillars are black or brown with a small white band in the center after hatching. Later instars are green with black striping and yellow dots on the striping. Each instar has its own coloration.

The black swallowtail butterfly feeds on members of the carrot family. In our gardens, we mostly see them on herbs in this group, but there are quite a few natives and other plants that they eat.

What Black Swallowtail Butterflies Nectar On

Similar to other swallowtail butterflies, black swallowtails feed on lot of garden flowers, including our favorite garden phlox. The following is a list of some of the more frequented flowers from my observations.

Besides the eastern tiger swallowtail, the zebra is my next favorite. It is also the one that I would chase into an overgrown stand of pawpaws to get a photo, and make mosquito-diving worthwhile. When I saw my first one several years ago at the Overland Park Arboretum, I was overjoyed. Now, I know where to find them and I always look for caterpillars.

The adult zebra swallowtail is very different from our other swallowtail butterflies. There are both spring and summer “forms”. Both are striped black and white like a zebra, but the spring form has 2 very distinct red spots on each hindwing. Summer forms have only 1 red spot on each hindwing.

Zebra swallowtail butterflies eat only pawpaws (Asimina triloba). You might think that this would make it easier to find the larvae, but you would be wrong. I have walked through acres of pawpaw groves and only seen the adult butterflies flying. I rarely find the caterpillars. This is because they feed mostly at night and hide among the leaves or at the base of the trees during the day.

What the Adult Zebra Swallowtail Butterflies Nectar On

I would think that they feed on whatever nectar plants are available to them near pawpaw groves, as I rarely see adults anywhere else. Because their host plant has a limited range, and groves are far apart, you do not usually find adults away from them. However, I have seen them nectaring on zinnias, tithonia, and purple coneflower.

The giant swallowtail butterfly is the one I often get confused with black swallowtails, because their markings are hard to pin down while in flight. Despite its name, they are about the same size as the eastern tiger swallowtails. However, they are beautiful butterflies which need to be encouraged with the few native plants they frequent.

In Florida, Texas, and other places where citrus (oranges, lemons, grapefruit, limes) are grown, giant swallowtail butterflies are considered pests, as they eat the leaves of these trees. But here in the Central Great Plains, we cannot grow most citrus trees without the aid of a greenhouse, so we enjoy seeing them.

The adult butterflies are black with a row of yellow stripes along the outer edge of the fore and hind wings, and a row of yellow spots across the forewings from tip to tip. At the base of the body, there is what appears as a “face” made from 2 “eyebrows” of blue, 2 red “eyes”, and 2 yellow “teeth”. Some call it a clown face.

Early instars of the caterpillars look like bird droppings, and continue to look much like that as they get bigger. I was blessed in 2020 to watch the process of development from egg to older instar on prickly-ash in my woods.

What Do They Eat?

What Plants do Giant Swallowtails Nectar On?

Because they are widespread across the south and central United States, giant swallowtails feed on many different flowers. Below is a list of flowers which will attract them to the garden.

Here my experience stops me. I have only 1 photo of a pipevine swallowtail butterfly, and it was on not on purpose. What I do know is that they are more of a southeastern U.S. butterfly, but we do get some localized populations in northern areas, when the host plant is put in.

The adult butterflies are black with bright blue on the upper side of the hind wings. A line of small, white dots run across the lower edges of the hind wings. If seen from the side, the under wings have a curved row of 7 orange spots and iridescent blue coloring, which distinguishes them from other swallowtail butterflies.

Caterpillars feed gregariously, or in large groups on the host plants. Eggs are shaped like a tiny orange fruit, and hatch into spiky, black and orange larvae.

What do They Eat?

Caterpillars of the pipevine swallowtail feed on, well, pipevines. But what are pipevines? Pipevines are members of the Aristolochia genus, which has only a handful of North American members. The most notable are woolly Dutchman’s pipevine and Virginia snakeroot.

What do Pipevine Swallowtails Nectar on?

Again, I have little experience with this one. But you should be able to find them near plantings of Aristolochia, feeding on plants that other members of the swallowtail group regularly go to. These include:

Swallowtail butterflies are some of our most interesting and largest members of butterflies in the Central great Plains. Watching and observing them becomes even more impressive when you have added both nectar and host plants into your garden for them. I look forward to seeing more them each year. And I hope you do too.

One thought on “Swallowtail Butterflies in Your Garden”