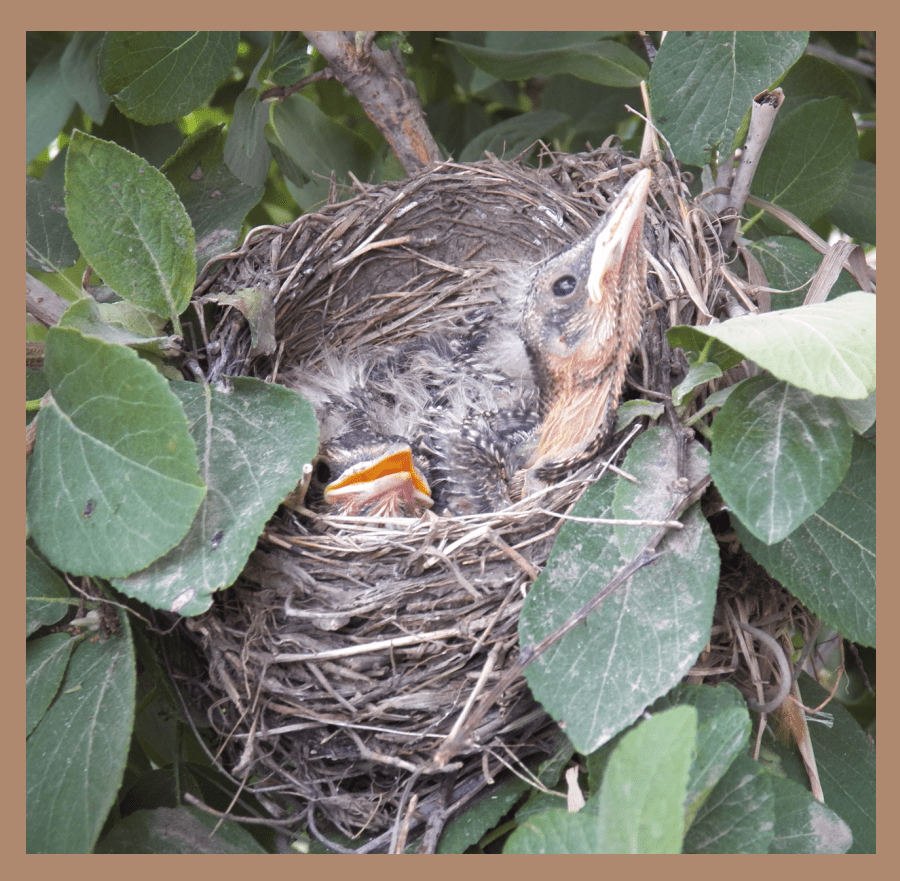 Planting shrubs for birds is about as much fun as moth hunting, for me anyways. I do not know what I love more, plants or insects, but they both provide me with a lot of joy. And the fact that I get birds to come for both is a bonus. But what shrubs are best for attracting birds in the Central Great Plains? And how can I add more of them to my landscape?

In my own case, they are already a part of my gardens. I have about an acre of garden space currently, and I have been clearing weed trees to create more space. Once the vegetable garden patch is finished, I will surround it with a border of shrubs, perennials, herbs, and flowers. Not only will these attract beneficial insects to the garden, they will also attract birds, which will in turn be a part of the garden bug crew.

I choose to use as many native shrubs as possible for attracting birds, because native shrubs are host plants for moths and butterflies, along with other insects which are bird foods.

Forget the cultivars, in this case. Although I have a few plants of Corylus ‘Grand Traverse’, those are for nut production mainly. In the shrub border and other parts of my garden, native, uncultivated hazelnuts are for the bugs and birds. Besides the unique flowers, I love that I can find hazelnuts growing wild along the woody places nearby. Plant hazelnuts in the shrub border, along the edge of a tree line in part to full sun, or add single specimen plants to the garden.

American hazelnuts grow 10 to 15 feet tall and spread into large thickets. Along with nuts for woodpeckers and blue jays, hazelnuts provide dense nesting sites for a variety of songbirds. As a host plant for moths, at least 14 species use it, including the American dagger, Corylus dagger, and Luna moth.

When it comes to birds, you can never have too many oaks. And since we have no real shrubby oaks in the Central Great Plains, the dwarf chinkapin oak will have to do. In truth, it is not a true tree shape, growing mostly with multiple stems. Size wise, it grows 10 to 15(30) feet tall and wide. The former National Champion is north of Morrill, KS and is roughly 30 feet tall and wide.

Oaks in general have the capacity to support several hundred moths, as well as many other insects which are food sources for birds. The dwarf chinkapin oak really does belong in the landscape, being extremely drought and heat tolerant, and able to fit into the shrub border. The acorns on this oak are small, and relished by wildlife, including deer, woodpeckers, blue jays, wild turkeys, and various mammals.

What would a list of shrubs be without at least 1 viburnum? Pretty poor indeed for a North American landscape. Viburnums are a most have in the garden. Indeed, there is one for nearly every situation. And I could choose from Nannyberry, Rusty Blackhaw, American cranberrybush, and arrowwood for birds. But the blackhaw is a great choice.

Besides having edible berries which humans, birds, and mammals all enjoy, this viburnum has rich red fall foliage. In my garden, cardinals make nests about 8 feet up, and the thorn-like stems keep out neighborhood cats. Also, at least 9 moths, and the spring/summer azure butterfly use it as a host plant. Blackhaw viburnums grow 12 to 15 feet tall and can grow into widening thickets.

Among dogwoods in my landscape, the native swamp dogwood is my favorite. The reddish stems in late summer and winter are useful in holiday creations, and the plants grow in moist to well-drained soils. Early in summer, flat panicles of white flowers open, attracting a wide variety of bees and butterflies. Following the flowers are blue-black berries which are eaten quickly by birds, including catbirds, mockingbirds, and other berry-loving species.

Dogwood shrubs can host at least 15 species of moths and butterflies, including the Polyphemus, Cecropia, Hag, and Saddleback. Growing 10 to 15 feet tall and wide, in single clumps, swamp dogwood is drought and wet tolerant, for full to part sun locations in the garden.

The black chokeberry has started to become one of the more widely used landscape shrubs, only after being deported to Europe, where it was selected for large berries as a health food. And indeed, one of the reasons it is added back into North American landscapes is its large, vitamin packed berries. But also because the leaves are shiny green and turn shades of orange and red in autumn.

Native to the Northeastern US, black chokeberry bushes seem to thrive in the Central Great Plains, liking both our alkaline soils and hot, humid summers. Besides its berries, birds make nests in the thickets of black chokeberry, and consume caterpillars of the coral and striped hairstreak butterflies, large lace-border moth, and Radcliffe’ dagger moth. Black chokeberry grows 12 feet tall and wide. Some cultivars are smaller.

Hollies are much thought-of shrubs when it comes to attracting birds, and the winterberry is no slouch. Native to the Midwest and the Southeastern US, winterberry is a deciduous holly which loses its leaves in autumn. The leaves turn shades of yellow, leaving behind the bright red berries for birds late into winter.

Cedar waxwings and other berry-eating birds enjoy the birds in late winter when other things are scarce. Besides the berries, winterberry holly hosts some 34 moths and Henry’s Elfin butterfly. It grows 6 to 12 feet tall and spreads into large thickets. Birds use the thickets for nesting.

One of the shrubs from my childhood, I remember seeing my first chokecherries when riding on a load of hay into the hay barn at my brother’s place. After helping load the hay, I would ride upon the load while he drove the tractor and trailer into the barn. At the entrance to the farm was a large thicket of chokecherries. At that time, they were fully ripe and as about as edible as a cotton ball. This is because the fruit is astringent and inedible until cooked and juiced.

But to the birds, the native chokecherry is a goldmine. Besides the fruit which is quickly picked from the shrubs, the plant becomes a large thicket, growing 20 feet tall, perfect for nesting songbirds. Also, chokecherries host at least 450 potential species of moths and butterflies. These include the Red-Spotted Purple butterfly, Coral hairstreak, and Luna moth. Birds such as the scarlet tanager, blue jay, Baltimore oriole, and wood thrush enjoy the fruit.

Even if this shrubby tree did not attract birds, it would be on my list of plants for the shrub border. The berries of downy serviceberry are edible and similar in taste to a blueberry/apple cross. Somewhat seedy, they seem to be an acquired taste to some. However, birds love the fruit just as much as I do. I have seen orioles, blue jays, scarlet tanagers, and robins enjoying the fruit in mid summer.

Once we thought serviceberry was a water-edge tree, preferring moist locations. But after some research and study in 2021, Doug Grimm and I concluded that downy serviceberry prefers to be high and dry, above the water line by as much as 100 feet. The creamy white flowers in spring are attractive to bees and pollinators and leaves turn reddish orange in autumn. Serviceberries are hosts to at least 7 moths and the red-spotted purple butterfly.

The bush honeysuckle is native to the Upper Midwest and Northeastern US regions, but does excellent in shady spots in the Central Great Plains. In fact, I have seen it both in full sun and nearly full shade in Northeast Kansas, and in both places it looked great. A creeping shrub, it grows 4 to 5 feet tall and forms large thickets. The flowers, which are yellow and tubular, attract hummingbirds, as well as bumblebees and butterflies.

A member of the Honeysuckle Family, bush honeysuckle is host to the hummingbird and snowberry clearwing moths, as well as the gray scoopwing moth. Bush honeysuckle is an important nesting site for ground birds, being a low growing thicket maker.

Sometimes called coyote willow in Kansas, this native willow grows 20 feet tall and wide, really more of a small tree than a shrub. But it is a willow. And, it can grow in large thickets, making it a great place for nesting birds. Willows do not produce large berries, but the amount of caterpillars far makes up for that. Willows have the potential to host at least 450 species of moths and butterflies, including the Mourning cloak, white admiral, and red-spotted purple butterfly.

Besides the potential for moths, willows grow in very wet spots, where few other plants can survive. Put them on the edge of the border, in a low spot, where water collects or runs off during rain storms. Willows have pollinator friendly flowers and good fall color. And they make good shade.

While this is not an extensive list of shrubs for attracting birds, they are my top 10. I have planted them in my landscape and enjoy the amount of birds I get each season because of them (and trees). I see birds such as indigo buntings, Baltimore orioles, cardinals, goldfinches, song sparrows, chickadees, and tufted titmice, among many others. I hope you can enjoy some too.