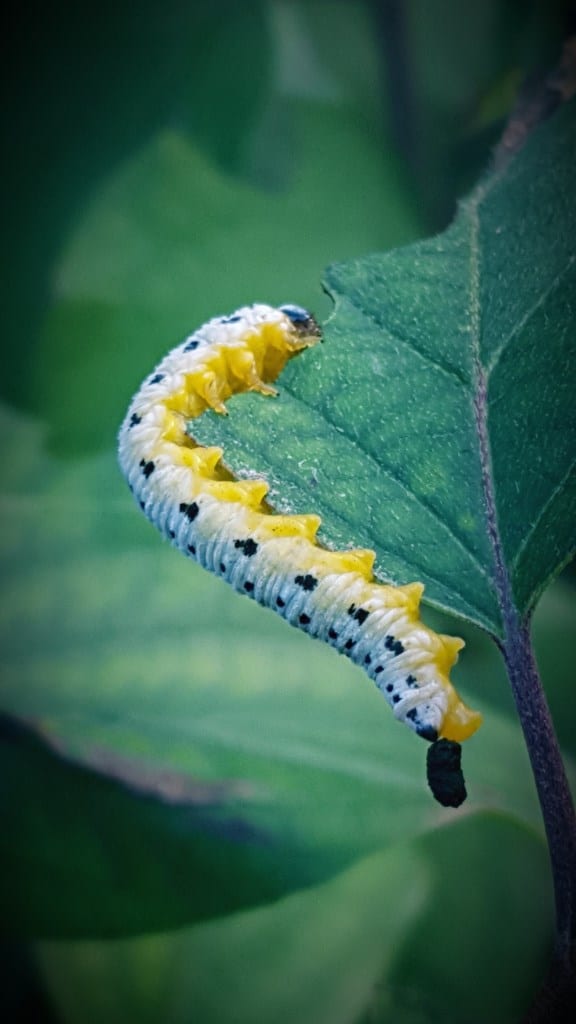 This year brought a new look at some insects I had seen little of in the past, and some outbreaks of major pests. I love insects almost as much as I love plants and I love photographing them-though it can be difficult with just smartphone! I will not show the over 1000 photos of insects I took this year, just some highlights of the more interesting ones.

I worked many Fridays in a row at the Atchison store and I was brought my first ever sample of Asparagus beetle. I had only seen book photos before the sample below.

Another new one for me was the striped blister beetle. Blister beetles are a problem when the grasshopper population is a problem-they eat grasshopper larvae in the soil. Below is a gray blister beetle feeding on my hostas (they also decimated my anemones) and striped on a wall.

The Japanese beetle became a major outbreak pest this year too. A pest of turf and ornamentals, these nasty critters feed on just about everything. I must have killed thousands just by knocking them into soapy-vinegar water. Luckily for me, most in my yard started with Four-point Evening Primrose before feeding on other plants. It was easy to walk up to the plant and just knock them into the bucket. Below they are seen feeding on butterfly bush in Atchison.

The walking stick is another insect I have seen little of in the past. I saw three different ones at the nursery in Atchison! These predatory insects eat other insects, making them a good guy to have around the nursery. The one below is the first sighting of the year.

Sawflies were not as common this year for our maintenance customers, though we did see some rose sawfly and some dogwood sawfly. These leaf feeding caterpillars can quickly defoliate their host plants. Below, Rose Sawfly and Dogwood Sawfly

The Painted Lady butterfly saw huge numbers in our area with its annual migration. The caterpillars of this striking butterfly fed in great numbers on soybeans and other plants in the neighborhood. They were compared to Monarchs with their colors, but they are not nearly as large as Monarchs

The Colorado Potato Beetle may look pretty, but it can be devastating to potatoes. However, this specialized beetle feeds on other members of the nightshade family, so plant a row of buffalo bur as a target plant for spraying on. These beetles love buffalo bur!

The Indigo Duskywing Skipper is a pretty but shy, butterfly. Their caterpillars feed on false indigo, but after the bloom time, so we let them feed. This butterfly is a pollinator and should be protected from overuse of chemicals. I choose to let the caterpillars feed if its only cosmetic damage-not death to the plant.

Th last insect I found was this dogwood borer caterpillar. The adult is a clear-wing moth. They do minimal damage to dogwoods such as Arctic Fire or Ivory Halo, when we cut the canes back every other year.

Come back next week for my review of diseases and abiotic disorders!