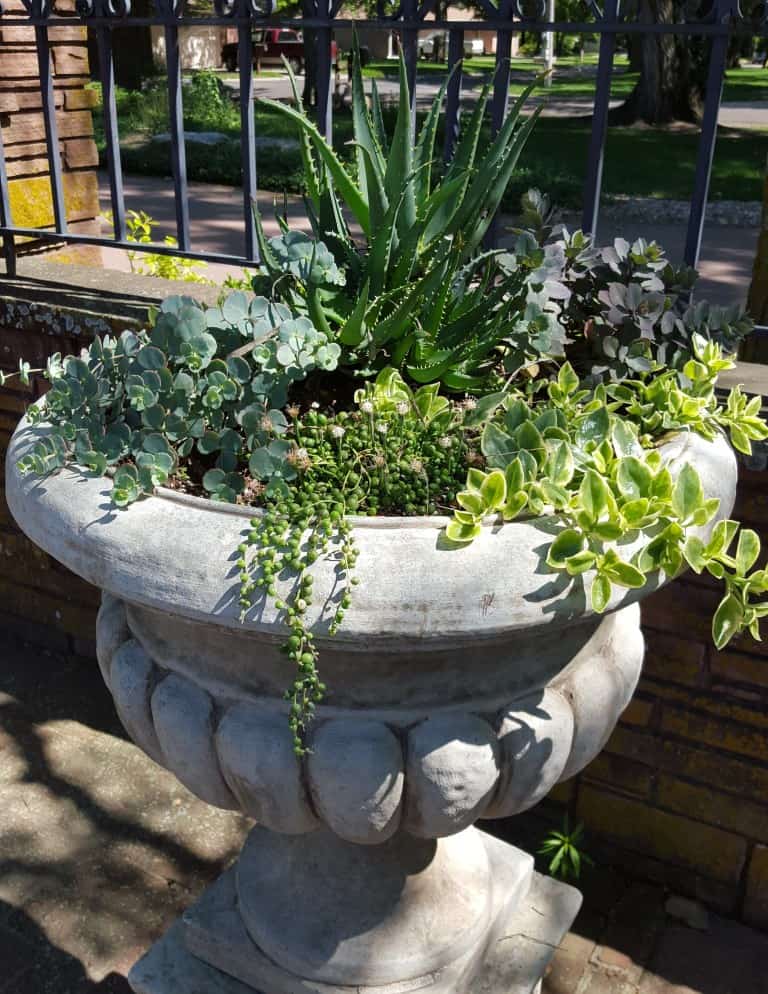 The Xeri-Pot was a creation of mine during the summer of 2012 when the weather proved to be extremely dry and hot. It was so hot that the nights did not cool down, and often roasted plantings overnight. Annual plantings wilted and dried up quickly, providing for the opportunity to create something that could live on very little water through drought-stricken months.

This was before the craze of succulents and sedums really took off in the nursery world, though it was starting to grow on the east and west coasts. Here in the heartland, it can take a while for unique ideas to catch on. My Xeri-Pot system uses just ordinary potting soil, but combines a range of plants that are known for drought tolerance, sometimes even disliking being watered.

I started it all with agaves, Sedum kamshaticum, Sedum ‘Angelina’, and a few other succulents. After 5 years, I have expanded my plant selections to include Yucca ‘Color Guard’, Sedum spectabile, dorotheanthus, lantana, lavender, purpleheart, and many other specialty plants for drought tolerance. After planting, I recommend these pots to be watered no more than 1 time per week if at all. Usually, rainfall is sufficient watering for these containers.

Xeri-Pot containers can be designed just like any other containers with tall plants in the middle, fillers and spillers around the edge. The “thrillers” can include agave, yucca, Sago palm, aloe, or even ‘Tiger Eye’ sumac. “Fillers” can be Helenium ‘Dakota Gold’, lavender, Sedum spectabile, and mounding succulents. “Spillers” can be dorotheanthus, Sedum ‘Angelina’, Sedum kamshaticum, string of pearls, lantana, and purpleheart.

If you think you need a container that can withstand the heat and drought of the summer, come out to Grimm’s Gardens for ideas and plants for your own Xeri-Pot system.