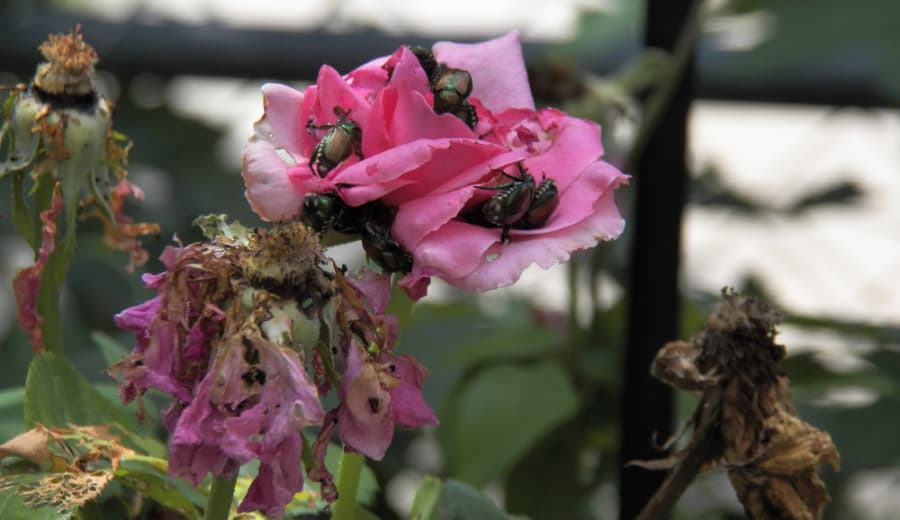 Now that summer is here, it seems that we get new outbreaks of pests coming through daily. What we really have is a buildup of pest problems that occur in succession through the season and become more problematic as plants suffer from heat and drought. The biggest concerns in our area are Japanese beetles, bagworms, grasshoppers, and blister beetles.

As I have mentioned before, Japanese beetles are one of the biggest pests in the home landscape. They feed on a wide variety of plants, including fruit trees, roses, lindens, and much more. The best methods for treatment include spraying and handpicking. For more detailed information on what to do about them, see my blog here.

2020 is turning out to be one of the biggest bagworm years I have seen. The last time bagworms were this bad, I was working for another company, in Topeka, KS. That was more than 10 years ago!

Bagworms cause so much damage because natural predators have a difficult time getting past the defensive bag that the caterpillar makes around itself. They feed on a large variety of plants, though they prefer evergreens, especially eastern red cedar and spruce.

Bagworms hatch in late May and into June, depending on the weather. They continue to feed until mature and ready for mating, usually around the first week of August. Then the caterpillars pupate into adult moths. The female moth remains in the bag and is visited by roving male moths. After mating, the female moth lays 500 to 1000 eggs, then dies. The eggs remain in the bag until the following spring.

Bagworms move from plant to plant by crawling or hitching rides on silken threads through wind and animals. If you are working near an infested tree, they may even cling to you as you move about the garden.

Bagworms are best dealt with by spraying withing the first 2 to 4 weeks after hatching, when the caterpillars are small and have not pupated yet. Chemical applications of bifenthrin, spinosad, neem oil, or BT can kill 85 to 95 percent of caterpillars in an infested area.

Another method of suppression is the removal of the bags, by handpicking during dormant months (September through April). This is best done on smaller trees and plants where a ladder is not needed. This can be a great activity to get your kids involved in gardening; pay them a penny a piece for every bag they remove. Removed bags should be burned (this too can be fun for kids).

Bagworms do have some natural enemies, unfortunately they have a hard time keeping up with the number of caterpillars because of the bags. Natural enemies include assassin bugs, praying mantids, stick bugs, and birds.

This has also been the year of the grasshopper. Since the beginning of 2020, I have never seen so many little grasshoppers. They feed on a large variety plants, everything from vegetables to flowers. If these were large grasshoppers, it would have been like the plagues of Egypt.

There are over 1000 species of grasshoppers in the United States alone, with thousands of species worldwide. They have tough, leathery bodies which resist pesticides and they can fly, making them difficult to kill.

Grasshoppers are best treated for with an application of bifenthrin in granular form to the lawn to kill emerging nymphs from hatch. This breaks the cycle of adult feeding on your garden and slows the spread of incoming hoppers.

While they share many of the same predators as Japanese beetles, one of the best treatments for your lawn and garden is pets. Ducks and dogs will eat a large number of immature and mature grasshoppers as they roam through the garden. If you like to fish, catch the larger hoppers to use for bait.

Blister beetles are always a problem in years following bad grasshopper outbreaks. This is because the larva of the blister beetle feeds on the egg pods of grasshoppers. After feeding on the eggs, they pupate and overwinter in this stage. The following summer they emerge as adults and begin to feed on a variety of plants.

Plants they eat include vegetables, hostas, alfalfa, and flowers. I have a huge problem with blister beetles on my hostas, while my mom has them on her tomatoes.

Blister beetles are so called because they they produce a caustic chemical called Cantharidin. When the beetles are crushed, they release this chemical onto their attacker (usually humans) and it causes blistering. There are many species of blister beetles in the United States.

Control of these big eaters can be done with a simple application of a pesticide to target areas. For my hostas, a one-time application of Bug Blaster (bifenthrin) killed the beetles and prevented future damage. Spinosad will also kill the beetles.

Hand picking can be effective in vegetable gardens, by just brushing the beetles into a pail of soapy water. Be sure to wear gloves when doing this to protect your skin.

Diatomaceous earth (DE), is another effective preventative for vegetable gardens. Apply DE around the base of your plants. As the beetles walk through the dust, the minute particles of shells will tear and cut the inner workings of the beetles’ bodies, killing them. DE must be reapplied after rain.

Insect pests in summer can seem daunting, but with proper management and cultural practices, you can limit the number of pests in your garden.