Skip to content
Home > Posts > Sumacs for the Landscape 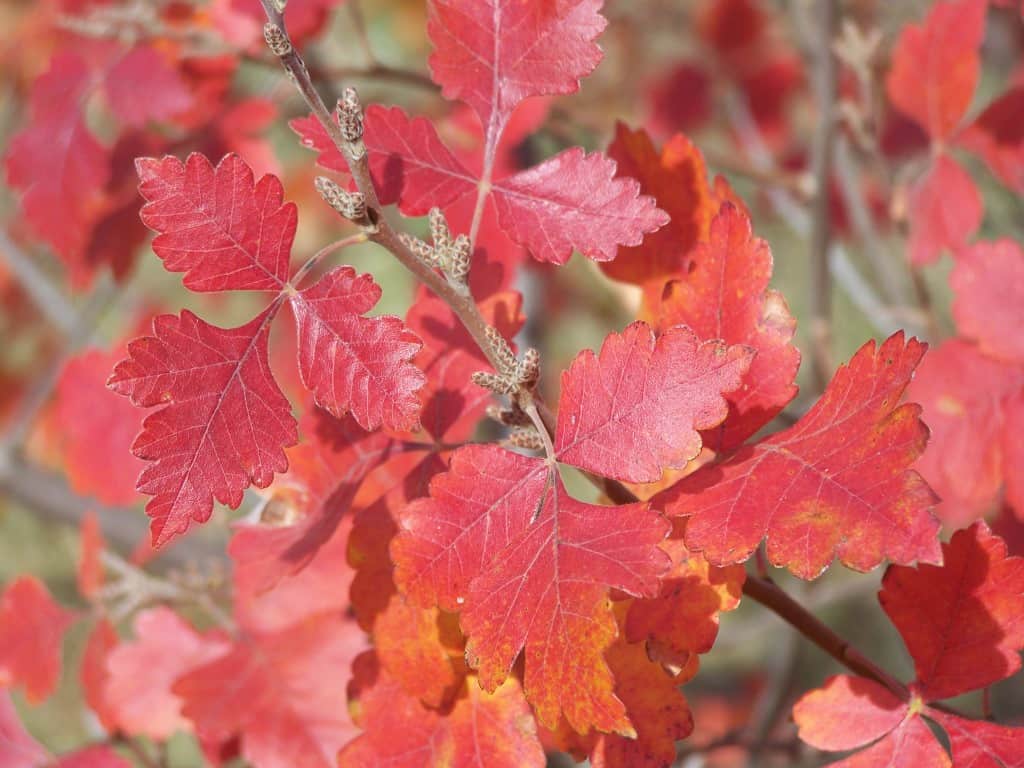 Sumacs are one of the more under used native shrubs in our landscape. If you want shrubs aglow with colors of fire and sunsets, then sumacs are the plants for you. You have seen them along the highways in the fall, oranges and reds in large masses dotting the hills of the prairie and un-mown ditches. There are 3 native sumacs that stand out among the landscape in the Great Plains, and all of them can be found in the nursery trade.  All of the sumacs spread through aggressive underground roots, called rhizomes. Some are less aggressive than others, but proper placement is critical when using these in a landscape. All the sumacs are drought tolerant, can grow in poor soils, and have great fall color.

Smooth sumac is the most commonly seen native sumac in the Flint Hills of Kansas. In dry summers and early falls, it lights up the landscapes with its red glows. The color is a rich, deep red, very much like the sunsets the Flint Hills are so famous for. Smooth sumac usually grows between 4 and 8 feet tall, is drought tolerant and can grow in poor soils or rocky outcrops. It forms dense groves of plants, often with more than 30 tops to the original set of rhizomes! It is best placed on the border of a landscape or along a fence row. Smooth sumac has bright red, edible berries that are ripe in the fall. The can be steeped to make a delicious jelly, or put in the mouth and sucked on for their citric flavors. The taste is similar to lemons. Many people get afraid of eating the berries, confusing poison sumac with other sumacs. Just remember, if it has white berries, it is poison sumac, the white meaning death.

Staghorn sumac is the larger cousin of smooth sumac. It is also where we get the favored cultivar ‘Tiger Eyes’. Staghorn sumac can be identified in the winter by its fuzzy stems, hence the name “staghorn”. It grows large, up to 20 feet tall. It too can produce colonies, but at a slower rate than smooth sumac. Often, in the landscape, ‘Tiger Eyes’ will send a sucker up a few feet away from the original, and is pruned off. Other times, the plant will die to the ground, a sucker will come up, and a gardener may regrow the plant from the sucker. ‘Tiger Eyes’ is a cultivar noted for its lime-green foliage through the year. It turns a beautiful shade of sunset orange in the fall. Developed by Bailey Nurseries, this cultivar tends to stay shorter than the species. The red berries of staghorn sumac are also edible.

Aromatic sumac could also be called by its other common name, Skunk bush. This fragrant member of the sumac family has a very pungent odor when stems and leaves are crushed or cut. It is the lowest member of the group, growing only 2 to 6 feet tall. ‘Gro-Low’ is a cultivar that typically stays under 3 feet tall. It is used as a ground cover for naturalized plantings and steep, un-mowable areas.  Aromatic sumac turns a yellow to orange fire color in the fall. The berries on this species are red, attracting birds, but not considered palatable to humans.