Skip to content
Home > Posts > A Story of Blue 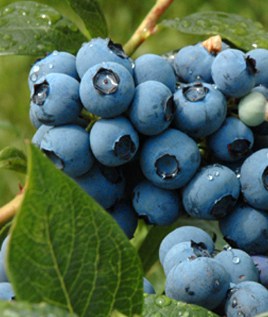 There is nothing that compares to fresh, warm blueberries picked early in the morning while the dew is still shimmering.  These berries are a favorite among many who have made the trek to Grimm’s Garden’s blueberry patch in early July.  We have been picking blueberries for many years now and usually there are clusters of berries just waiting to be picked; however, things have changed recently.

For the last three years, Doug Grimm has made the comment that the blueberries aren’t producing quite as bountifully as they used to.  They still have delicious berries, but we are picking them in ones and twos instead of clusters at a time.  Doug has sought many experts to learn about what could be happening here.

“Then, one afternoon in early January, a gentleman by the name of Allen Philo had a solution.” 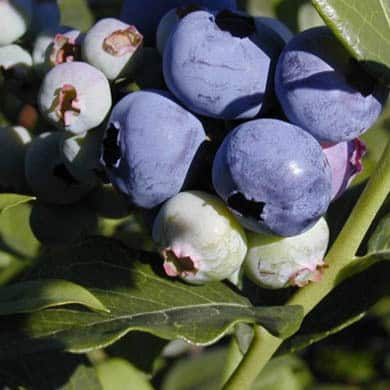 Then, one afternoon in Early January, a gentleman by the name of Allen Philo had a solution.  As a vegetable crop consultant with Midwestern BioAg in Blue Mounds, Wisconsin he said that this kind of thing is fairly common in the blueberries he has worked with.  The wood chips that we have put down as mulch are taking nutrients, especially boron, from the soil.  These are the nutrients that the blueberry shrubs need in order to thrive and produce fruit.

I will attempt to explain this chemical process – without going into a course on soil science.  Microbes in the soil help decompose the wood chip mulch.  They use nutrients around them in the soil as they work hard to break down the strong wood fibers.  Thus, there are fewer nutrients available to the shrub.  A while after all the wood has been turned back into soil, then the nutrients return to the soil.  Some mulches, such as composted materials, or even alfalfa mulch, do not deplete the nutrients as much or at all!  These are less woody so they decompose faster.

Now that we have found the problem, berry production will begin to increase and you can feel comfortable knowing our berries will be around for a good while to come.  It will take several years to get back to full production – in the meantime, come out and pick some blueberries!  Or if you want to try your hand at growing blueberries yourself, bring home a blueberry bush as well! 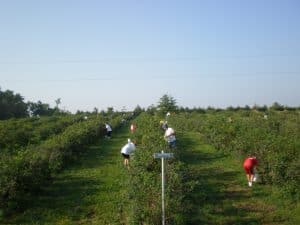 “In the meantime, come out and pick some blueberries!”