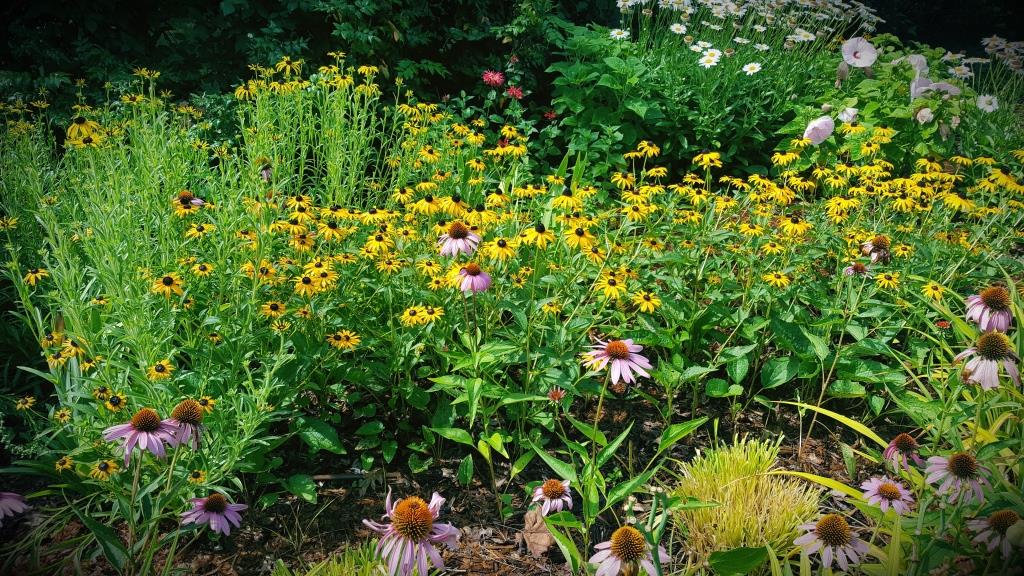 Its hard to think about the hot, dry summer days of July and August when the temperatures outside are in the teens and twenties. But those days will come as surely as the weather changes in Kansas and Nebraska. We live in one of the harshest growing climates in the United States-it could be minus fifteen below zero for three days in January and then be one hundred fifteen degrees in August the following summer. For many, they are looking for their annuals to thrive and produce flowers in the dog days of summer, but why not perennials?

In the summer of 2017, we had an extended drought period with little to no rainfall for six weeks. During that time, unirrigated lawns dried up, annuals died, and trees lost leaves. But a number of tough, heat loving, native cultivars bloomed their hearts out. And they do it every year, no matter the weather in summer.

So stack the deck in your perennial garden with these heat lovers. There are many cultivars of each and different species as well, but the following are the best for our region.

Rudbeckias are a fan favorite of my customers for their brilliant yellows in the heat of summer. There are multiple species within the genus and some bloom from June to October, deadheading themselves. I have one customer in Sabetha who has 6 species and/or cultivars of rudbeckia scattered around the property. The best bloomers are R. laciniata ‘Herbstonne’, R. subtomentosa ‘Henry Eilers’, R. missouriensis, and R. hirta.

Coneflowers (Echinacea) are a native treat during the summer and their bloom time, as well as for the goldfinches in winter who eat their seeds. While hundreds of cultivars and hybrids have flooded the markets in recent years, the straight species of E. purpurea and the cultivar ‘Wild Berry’ are the best for solid masses of that pink-purple color for weeks on end starting as early as May. I have also noted E. paradoxa, the Ozark coneflower to blooms for as long as 8 weeks nonstop.

The old-fashioned Alaska daisies (Leucanthemum superbum) can sometimes be seen growing along highways and roadsides where they have escaped cultivation and proliferated. These daisies hold their flower stems daintily above the bushy leaves and bloom their hearts out from June to September.

The giant, dinner-plate hibiscus and other hardy hibiscus are another show-stopping force in the heat. They really make a landscape appear more tropical with their large, flashy blooms. Common colors are red and pink, but new, multi-colored bloomers are being released each year.  While they are one of the last garden perennials to pop up in spring, they will bloom from July to September if the heat holds.

Ornamental onion ‘Millenium’ has stolen my heart in the past few years since its introduction to our nursery. This short perennial (12-14 inches) is great when mass planted or in a border where it blooms steadily for six weeks. And the pollinators love it! Every day I could wander to my planting of it and see hundreds of bees, butterflies, wasps, beetles, and flies taking advantage of the nectar. There are other ornamental onions on the market and I expect the number of cultivars to continue to rise as demand for these pollinator pleasures to increase.

Sneezeweed or Helen’s Flower (Helenium) is another great bloomer for the heat of summer. Flower stalks rise above the mass of green leaves with mixed shades of red, yellow, and orange among the petals. The sneezeweed keeps on blooming, flower after flower from July to September and sometimes to October.

While many gardeners know of the yellow or red blooming Mexican Hat (Ratibida columnifera), they often have not heard of its cousin, the tall Grey Headed Coneflower (Ratibida pinnata). Both of these coneflowers bloom profusely through the summer. Mexican hats can be seen blooming from June to October and Grey Headed coneflower from July to September.

So plan ahead for summer and pick up some of these hot loving beauties at Grimm’s Gardens!