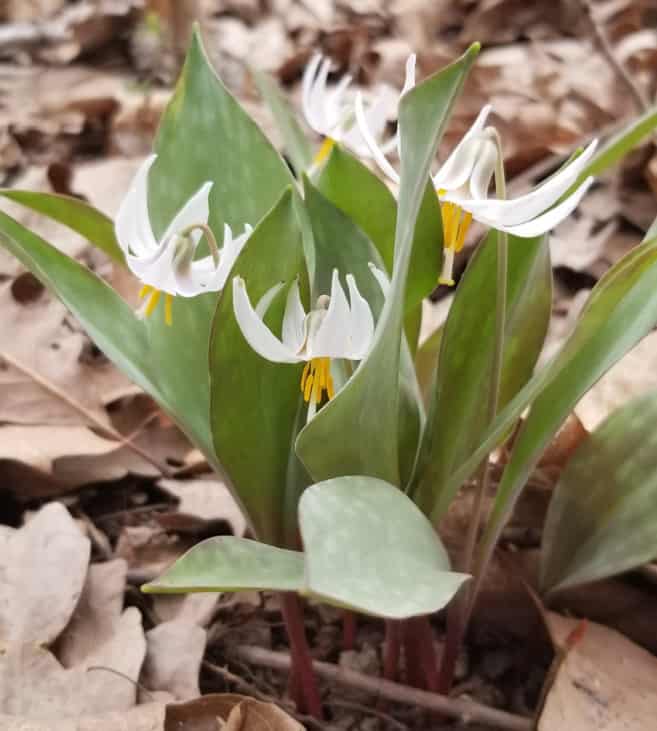 This is the time of year when spring ephemerals start emerging in the woodlands. These mostly little beauties are not only heralds of spring, but the only pollen and nectar source for early bees, butterflies, and moths. I would go so far as to say that they are rockstars of the plant world, in early spring anyways.

What are ephemerals? They are plants that have to complete their life cycles in a short period of time. Not in the months that trees, shrubs, and most herbaceous perennials take. Spring ephemerals come up, flower, and set seed in just a few weeks, then mostly go dormant the rest of the season. With a few exceptions of course.

Locations to Hunt for Spring Ephemerals

Despite being on the edge of the prairies of the Great Plains, there are more pockets of woodlands around me than one might know. The following is a list of places to hike woodlands in the Central Great Plains, without paying an arm and a leg, or travelling too far.

Spring Ephemerals – A Guide on What to Look For

While spring ephemerals vary on region, there are 9 species which can be found easily in the Central Great Plains region, in most of places listed above. I myself have not hiked all of these places, but so far I have gone to 10 of them. I am planning on hiking much more in 2022, so I hope to see you out there.

One of my favorite early spring ephemerals, I first saw it blooming on a wildflower hike at the Overland Park Arboretum in 2018. Since then I have found it at only one other location, Jackson Park in Atchison, KS. But I suspect it would be found both at Indian Cave State Park in NE and Waubonsie State Park in IA.

Bloodroot is native mainly east of the Missouri River, though I have found on the eastern facing slopes of the west bluffs of the river. It is a small plant that spreads by rhizomes and can be found in great patches. When the rhizome is cut, a bloody red sap drizzles out. This is where the name comes from. The leaves come up shaped like a catcher’s mitt and a single flower arises between a single leaf. The flower is composed of 6 to 12 unequal, white petals that form a “square” shaped flower head. Flowers close at night and reopen in the day, but they only last a few days.

Flowers are visited by bees, syrphid flies, and beetles. Ants spread the seeds.

When this spring ephemeral comes up, it looks like masses of ferns covering the sides of hills. I have found it at every spot I have hiked in the woods. It often grows in large patches. A relative of our old-fashioned bleeding hearts, Dutchman’s breeches are found in the Northeastern Great Plains, Midwest, and New England areas. There are 6 other species of native Dicentra, though only Squirrel Corn (Dicentra canadensis) can be found in the Central Great Plains, mainly in Missouri.

The deeply cut, fern-like leaves of Dutchman’s breeches come up first, opening about 6 to 8 inches wide and only a few inches tall. Flowers are on stalks 6 to 10 inches long, 3 to 10 flowers per stalk. They look like a pair of white breeches. I have only seen bumblebees pollinating these unique flowers, though other bees and butterflies do visit occasionally. Ants spread the seeds to new locations.

The cutleaf toothwort is another plant that I find nearly everywhere I hike, at least in woodland settings. A member of the mustard family, toothwort has a long history of medicinal and culinary uses with the Iroquois. Native from eastern Kansas to the Atlantic Ocean, it grows in small patches dotting the hillsides of oak-hickory and maple-basswood forests.

The deeply lobed leaves come up and are followed by stalk with 6 to 15 short, white to pink flowers. They are pollinated mostly by bees and bumblebees.

Also called the white dog’s tooth lily, this ephemeral is one of my favorites, mainly because it is so easy to find. It was the first woodland wildflower I discovered growing on my property in Northeast Kansas. And because of that, I have learned it well. It is native from the Kansas east to the Appalachian Mountains.

I have noticed that it takes 2 to 3 years for a new seedling to develop enough energy to flower. That is why you often see large colonies of leaves with only a small percentage of flowers, comparatively. The first season, trout lilies only produce one leaf, growing 3 to 5 inches long, mottles green and brown. When they are mature enough to flower, a single stalk arises, with a dainty, bell-shaped flower hanging down. Petals of the flower curve up and back, nearly to the base of the flower. This characteristic is what distinguishes it best from the next species (White fawnlily).

Flowers are mostly pollinated by bees, bumblebees, and sometimes bee flies. Also, butterflies and skippers may visit the fancy flowers.

Found mainly in the Central Great Plains region and south into Oklahoma, Arkansas, and Texas, the white fawn lily is also called the prairie fawn lily. Unlike the trout lily, it does not usually have mottled leaves, though it does grow in close community to trout lily. I have found them both on the same slopes of Klinefelter Farm in Brown County, KS.

The flowers hang down and the petals do not curve upwards to the same extent as trout lily, making this the biggest identification factor.

This spring ephemeral is one of the most unique flowering species we have here in the Central Great Plains. When I first saw these blooming in the woods by Mission Lake, I was enthralled. There are only 2 species in this genus, and both live in about the same regions of the eastern U.S. The other species is Arisaema dracontium, the green dragon. Jack in the pulpit is easier to find, I think. I have seen it in many places that I hike, even ones not as richly wooded.

Leaves are compound with 3 leaflets. The flower stalk is called a spathe, which contains the spadix, or “jack”. They are usually green, but I have seen some purple and yellow variations. The flowers are primarily pollinated by fungus gnats (finally a purpose for these bugs!). Fruit or berries of Jack in the pulpit come out in late summer to early autumn and are browsed by wild turkey and thrushes.

The mayapple is an interesting species, not completely ephemeral, as the leaves linger through most of the year. It could be used as a groundcover species, in conjunction with other natives. Leaves are large, almost tropical looking. When you come across a large patch of these, it is quite a sight. The leaves are palmate, and deeply lobed.

Flowers of mayapple are large and showy, but hidden under the leaves. Despite that, they are fragrant and a patch can smell wonderful. Bees pollinate the flowers and box turtles eat the fruit, spreading the seeds.

When I first discovered woodland phlox, I did not even know what it was. That is because I first saw it growing in my grandmother’s garden in Cloud County, where it is native, but not widespread like eastern Kansas. The delicate blue flowers are quite showy in early spring. However, woodland phlox is not a true ephemeral, at least not in landscapes.

In the woods, it tends to disappear into the foliage and backdrop of large, summer shrubs and perennials. But in my landscape, where it is the edge of my Woodland Border, it stays green nearly year-round. Flowers are mostly a powder blue to purple blue, but can be pink, purple, or white. In fact, I found 2 separate white plants on the same day, growing in a mow zone in Atchison County.

What is a mow zone? An area of native or naturalized turf or weed area which is often mowed to keep up appearances. Many plants in these zones are not allowed to flower and set seed properly because of constant threat from mowing.

Unlike the true rue anemone (Anemonella thalictroides), false rue anemone is widespread, at least in all the places I have hiked. It grows in large clusters across both rocky and wet slopes. Native from the Central Great Plains eastward to the Smoky Mountains, it may not be known in the Appalachians. The dainty, white petal-like sepals rise a few inches above the deeply lobed leaves.

What are sepals? A structure of the flower of angiosperms (flowering plants) that usually support or protect the petals and are typically green. Many flower structures contain no true petals, but are rather sepals.

Bees and flies are the main pollinators of false rue anemone. They spread by seed and clonal tubers which spread much like a potato would if left un-dug.

The above spring ephemerals are the most common in the Central Great Plains. However, there are others that are less common that you may find while hiking or exploring. The following is a list of some of these plants to look for.

Remember, many native plants are endangered by habitat loss and poaching. Do not remove any plants without special permission by the law or landowner, and only under threat of destruction. If you see poaching of native plants, call your local authorities.

Hiking in the woods and prairies, be it spring, summer, fall, or winter is both enlightening and peaceful. Finding our early spring ephemerals is a pleasure unlike any other experience. Get out and hike the Central Great Plains.