Skip to content
Home > Posts > Learn What Kind of Rock Mulch is Best. 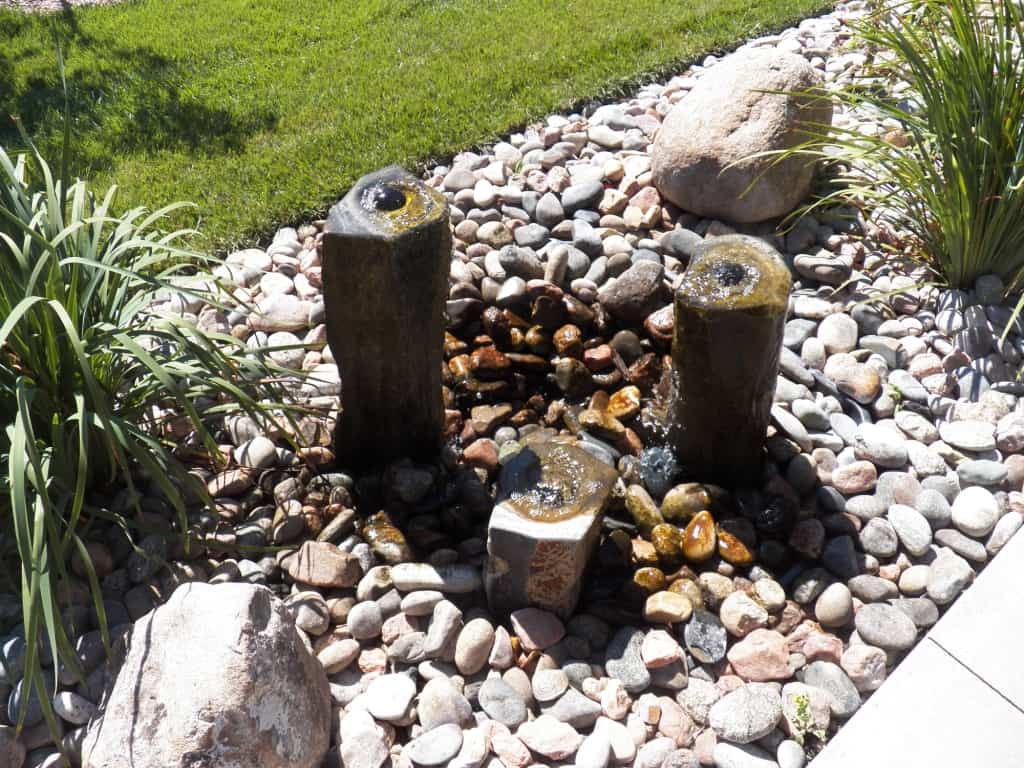 In the previous blog I talked about using mulches and comparing the different kinds available in our region-the central Great Plains. This week I am going to discuss using rock instead of mulch. The main thing to remember with using rock is that you must use a weed barrier fabric underneath for it to be effective. In our region the most common found rock mulches are lava, Kansas river, Colorado river, pea gravel, white quartz, and Colorado cobble.

Lava rock can be found in many older landscapes and is still available at many big box stores. This lightweight rock was a favorite in the 1970s and 80s and is still liked by older customers for its ease of use. However, lava rock does little to beautify a landscape, unless you have a red colored house. Many people associate lava rock with an aged landscape that needs renovation. I would not recommend lava rock for that reason, as well as the pores in the rock can hold bits of soil, allowing for more weeds to grow.

White quartz is another landscape rock sold mainly at big box stores geared towards unknowing customers. Most new homeowners see the sparkle of the white rock and think that is just what they need for their new home landscape.  However, the quartz can become quite expensive, bulk rock sold by landscape companies and garden centers cover more area for the price. Again, there are few places anywhere, that white rock looks good in the landscape.

Pea gravel is more commonly used as a material for paths in the landscape, but is occasionally used as a bed covering. I have seen it used in conjunction with Kansas river rock in a landscape for a wonderful effect. If applied thick enough, pea gravel’s fine texture can beautify a landscape. When using it as a pathway covering, be sure to pack it firmly with a plate compactor and use edging to confine it to the space.

Colorado cobble is usually found in water gardens, but has become increasingly popular as a landscape covering. Sizes range from 1 ½” to 6” in diameter. The look of Colorado cobble is what is most attractive to customers. Shades of gray, red, green, pink, and brown give color and depth to the landscapes it is is. However, Colorado cobble can be a maintenance nightmare; such large rock can create big gaps in the layering, giving weeds a better chance to attack.

Colorado river rock is similar to Colorado cobble, but is much smaller and contains many more broken pieces than the rounded cobble. Colors range from gold to brown and pink to green. The pores size is smaller, making Colorado river a better choice for weed control, though it will still need cleaning every 5 to 7 years.

Kansas river rock is probably the most commonly used landscape rock in our region. It may have other names, but it all comes from rivers in Kansas. Made up of pieces of flint, chert, granite, and limestone, this landscape rock lightens the landscape up with its muted tones of white, gray, and bronze. If you have a landscape that uses a lot of evergreens, Kansas river rock will help them stand out. Since this rock is naturally found in this area, it complements its surroundings well so that your plants and your house stand out.

Normally I don’t recommend landscape rock as an alternative to organic mulches, but there are some applications where it may be more desirable. In commercial settings, such as a bank or restaurant, where both the landscape and the drives need to be kept clean, landscape rock may be better than mulch. Mulch can blow around, causing extra maintenance time for cleanup on drives. However, when laying down rock, it is important to remember that weed seeds, dust, dirt, and debris will blow in and accumulate in the spaces between the rocks.  Both mulch and smaller rocks can be moved by flowing water in a landscape, so be sure and bury the downspouts or use larger rock where the water comes out.

Be sure and use a high quality, long lasting, weed barrier underneath any application of rock. It is tempting to use the cheap, plastic barriers sold at box stores, but they can break down quickly and some don’t allow water and air through to the soil. Dewitt Pro weed barrier can be found at garden centers and lasts up to 20 years. It is a woven fabric mesh that allows both water and air to get to the soil.

Keep up the good work!