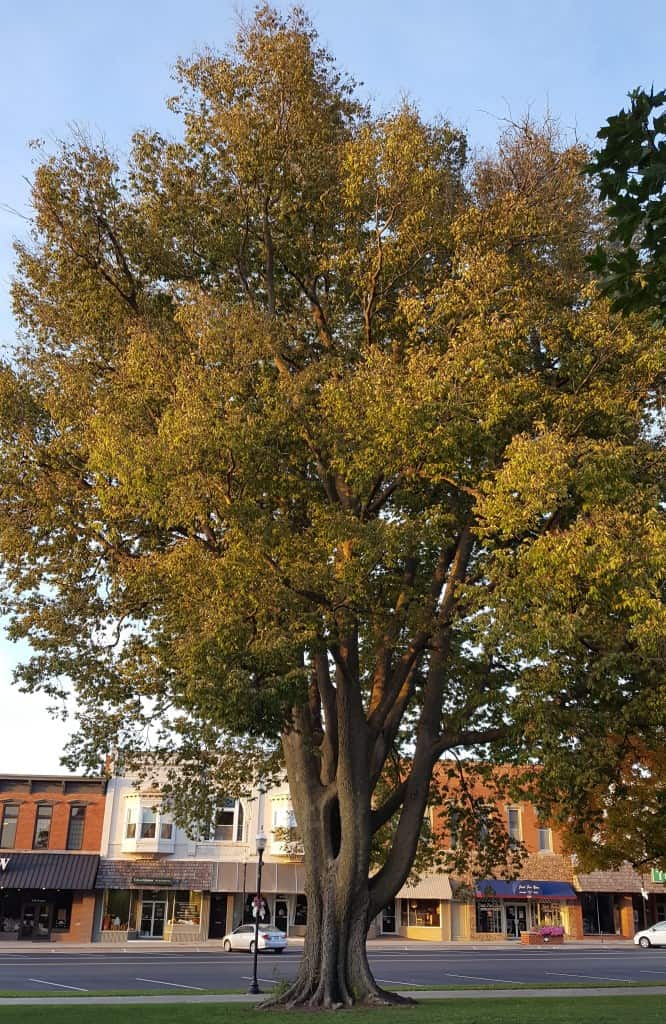 The common hackberry (Celtis occidentalis) is a commonly mistreated tree. When I was in younger I disliked this tree greatly,, partly due to its readiness to produce hundreds of seedlings in our garden. While at Kansas State University, a hackberry tree seemingly fell down on its own at one of the sororities. I am sure now that it must have been either a girdled tree or major root damage from recently poured driveways. Either way, I have come to love the common hackberry.

At the courthouse in Hiawatha, KS, stands one of the largest hackberry trees in Kansas. It has a trunk diameter of over 36 inches and a massive canopy. In both cultivated and wild areas, these trees can become quite large, often reaching 75 to 100 feet in height and a canopy spread of 50 to 100 feet. The bark on both young and mature trees can be ridged or smooth. It is uncommon, but not impossible to find a deeply ridged large specimen. I know of at least one in the woods by my childhood home.

A big benefit of the hackberry is the insect populations that it supports. There are many species of butterflies and moths whose larvae feed on hackberry including the American Snout Butterfly and the Hackberry Emperor Butterfly. There are a lot of different insects besides butterflies that feed on hackberry including different psyllids and aphids. These insects rarely cause severe damage, but can be an important factor in maintaining biological numbers of lady beetles, lacewings, and parasitic wasps.

A downside to many hackberries is the appearance of hackberry nipple gall. It is a small, round gall that appears on the leaf surface in midsummer. It can cause defoliation in severe years, but otherwise is just very unsightly. The trees are also somewhat brittle, dropping a fair amount of small twigs and branches through the season. Fall color can be a light yellow, but there is usually no color at all, just plain brown.

Hackberry trees will grow in many different situations. They will grow for a while as an understory tree, until they reach above the canopy of smaller forest trees and spread out. They can grow in areas that may flood during a spring or fall storm. They are also good trees for open areas including lawns and parks. The leaves are not messy in the fall, crunching quickly up when mowed or raked.

The hackberry produces small, reddish to black berries in summer which are quickly eaten by birds. They are very astringent to humans, causing the namesake “hacking” or cough. Celtis laevigata or Sugarberry, is a cousin of the hackberry with sweet berries that are palatable to humans and animals alike.

Here at the nursery we carry hackberry trees in various sizes. Doug Grimm is currently working on cultivars for more prominent bark and better fall color.

No matter how many trees you have, you should make room for the common hackberry. Keep on gardening!

2 thoughts on “Hackberry…A Tree Which Belongs”