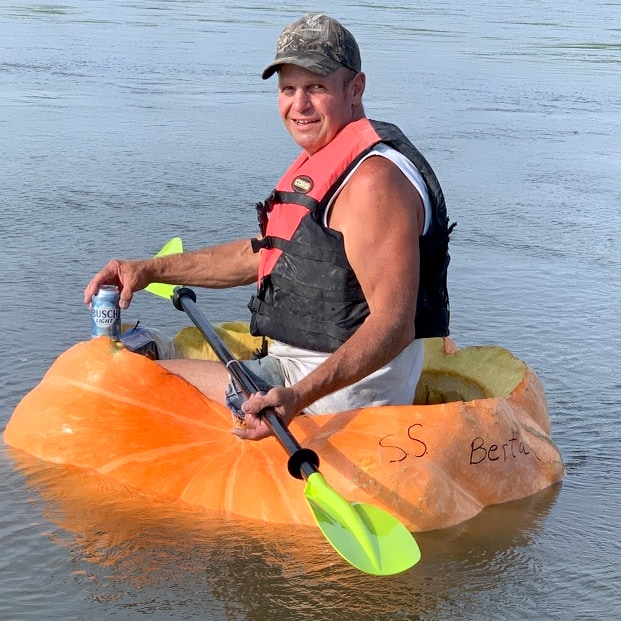 Have you ever wanted to try growing giant pumpkins? In 2022, Duane Hansen of Syracuse, NE did just that, and set a world record too. I met Duane at a meeting of the Nebraska City Talkin’ Dirt Group in October 2022, and was impressed not only by his pumpkin growing prowess, but also by his love of gardening. In late summer of 2022, Duane Hansen not only grew a giant pumpkin, but set a record by floating it down the Missouri River.

Getting Seeds of Giant Pumpkins

One of the first things that Duane mentioned was that you could not buy seeds for giant pumpkins from catalogs. I know, my first thought was of Dill’s Atlantic Giant pumpkin, which every seed catalog sells. But it is not so easy. However, giant pumpkin growers want you to buy their seeds and grow their big pumpkins, to validate their choices for pumpkins.

One of the things Duane mentioned was to join the Great Pumpkin Commonwealth, which is a group of growers and a governing body for growing giant pumpkins. It is a great place to get started when planning your giant pumpkin patch. And growers link together to share tips and tricks, seeds, and stories. Seeds for giant pumpkins are sold with the intention for growing pumpkins bigger than those they came from.

Some seeds, such as those from record setters, can sell for huge amounts. Ron Wallace grew the first recognized 2000lb pumpkin, and seeds from it sold for $500 each! That is a lot of money for a giant pumpkin. But if your pumpkin becomes a giant, then you can remake your money by selling its seeds.

There are several things to prepare for when you are planning on growing giant pumpkins. You need plenty of space, water, protection, and the ability to start seeds inside or at least, in a greenhouse. Even before you order seeds, you should be prepared for growing. You cannot just throw the seeds into your regular garden space and expect the pumpkins to take care of themselves.

First, before all else, pick your site. According to Duane, you will need at least as 30 foot by 30 foot area for growing just 1 giant pumpkin. So, if you want to grow more than 1, you will need multiple plots of ground. Before you start prepping your soil for pumpkins, you will need a soil test. Find out how to take and read a soil test here : How To Read A Soil Test.

Once you get your results back on your soil, and you know what you are dealing with, take the following considerations.

If I were planning to grow giant pumpkins, then I would do a soil test in the fall, and prepare after by adding compost, leaf mold, and biochar. Then I would layer wet cardboard covered with partially composted animal bedding and leaves to protect the area over the winter.

Setting Up The Growing Area

Once you have your soil the way you want it and the spot chosen for growing pumpkins, then you can begin to plan for the planting of them. While Duane recommends planting the seeds indoors (more on that below), the transplants will do best if planted into a small greenhouse or hoop house in early spring. I would think that you could warm the soil for the area up faster by pulling back the mulch in the planting spot, and applying either a clear plastic cover to the ground directly, or by setting a small hoop house over the area. Do this in fall or midwinter when there is no snow yet on the ground.

Plan to have a ground cloth or tarp under the pumpkin you pick to grow and also a tent to keep off the sun. Some of the styles I have seen for growing giant pumpkins include pavilion-like tents to small curved trail tents. Whatever you do, plan to keep the sun off the pumpkin itself, but not the plants.

Another factor you must include is plans for watering. While a drip irrigation setup is ideal for most garden plants, you will likely need a larger source for your giant pumpkin. Plan to deliver as much as 250 gallons of water per plant per day during the growing time of the pumpkin. This is why I will likely never grow giant pumpkins, because I do not have an adequate water source for that much water.

Now that you know what to do to prepare the location and soil for your giant pumpkins, let us dive into planting and growing them. Duane had some great tips for starting the seeds of the pumpkins, and was super excited to share the. Plan first to start your pumpkins inside with the plan to plant them outside 6 days after germination. This is why you need to have you growing hoop ready to go before winter sets in.

Plant seeds inside in February or March in the Central Great Plains region, which is Zones 5 to 6b. Duane uses a styrofoam cup from the gas station, with the lid, turned upside down. Cutting off the bottom and filling with potting soil, he leaves the lid as the bottom and plants 1 seed per cup and waters. Grow them in a warm place with good lighting. When the seeds have germinated (start 5 to 10), pick ones with the biggest stems and leaves. Plant these outside in the ground after 6 days to prevent root circulation within the container. To do, simply dig your hole, them slip off the lid from the bottom of the container and slide the plant out downward, holding to the bottom.

As the Plants Grow

As your plants grow, they should still be under your hoops or portable greenhouse. You should have at least 2 plants for cross pollination. If it were me, I would have an area set up to grow as many as 4 different giants, possibly as many as 10. Then you could easily cross pollinate all of them. Once the plant begins to flower, tie up the flowers before they open with a rubber band to keep bees from pollinating them (this ensures you get the genes you want to each flower for future generations). When you get a female flower (set with a tiny fruit), open it and a male flower from another plant, and pollinate by hand by brushing the male flower first with a clean, finely-bristled paintbrush, then brushing the female flower with the pollen on the brush.

Repeat this process on 2 to 4 female flowers on the main vine. Once 1 pumpkin has set and begun to grow, remove the others and cut off any secondary vines and flowers. Plan to keep just the one vine and pumpkin to grow for a record. (A tip I learned about pumpkins and melons is to pinch back the end of the vine at the tip. This stops vine lengthening and makes the plant send its energy towards fruit production).

Once the pumpkin has set and begun to grow, set up your tent for protection. Now is a good time to begin foliar feeding with fertilizer.

One of the biggest problems I have with growing giant pumpkins (other than watering) is pest control. I think it would be difficult for an organic gardener who uses almost no pesticides, to grow these. Once the hoops or portable greenhouse was removed, Duane sprayed the whole plant with a pesticide containing Bifenthrin, and again every 2 weeks during the growing season. While this chemical did work to keep off squash vine borer, aphids, squash bugs, and cucumber beetles, it is also a chemical no-no for the organic gardener. Duane also sprinkled the plant liberally with Sevin dust.

Now, as an organic gardener, I might try some other tricks for protection from pests. For preventing squash vine borer, I would rather use diatomaceous earth. To keep off squash bugs, cucumber beetles, and aphids, I would rotate between Spinosad and a mixture of garlic oil, cedar oil, and chili powder. It sounds crazy, but it works!

Harvest and Weighing Your Giant Pumpkin

Joining the Great Pumpkin Commonwealth will help with finding the place to get your pumpkin weighed in at. Duane did not mention much about this stage in the journey, because he was more concerned with hollowing out his big pumpkin for his ride down the river. But, there are many folks who are willing to help you get your pumpkin weighed and measured. And I hope you grow a BIG one!

For the right person, growing giant pumpkins will be a richly rewarding process. For others, such as myself, just seeing the might of these giants is all we need. I do not think I will ever try to grow a giant, but would happily settle for some 50 to 100lb pumpkins for eating and decorating. But if you make it and grow one, show it off and enjoy.