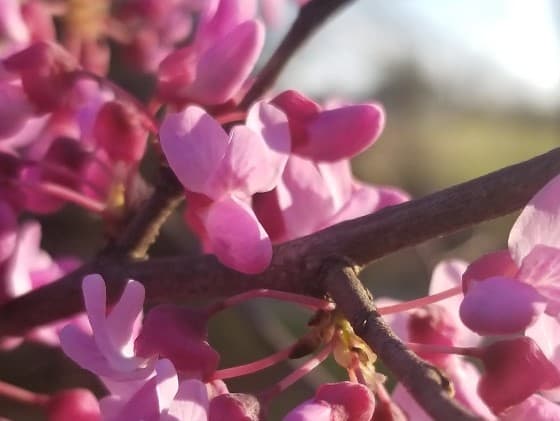 In this time of uncertainty, and the worry over possible food shortages, people are gardening more and more. In you own already landscaped yard, have you wondered what plants might be edible? There are a variety of edible plants you didn’t know you had, already growing in almost every landscape.

Learning what plants grow in your landscape can help you to decide what other edibles you may want to add to the garden. So, what are some obviously edible landscape plants?

Plants with edible characteristics that are obvious

Serviceberries are commonly used as landscape plants, both tree and shrub varieties. They are desirable for their white spring flowers, great fall color, and hardiness to Zone 4. The berries are blue-black, resembling blueberries in size and shape. However, the taste is their own, and they have larger seeds than blueberries. But they can be eaten fresh, made into pies or cakes, or juiced and jellied.

Common cultivars include ‘Allegheny’, ‘Regent’, ‘Princess Diana’, ‘Spring Glory’, and ‘Rainbow Pillar’. There are several other varities of both tree and shrub forms. They grow well in full sun, dry to partially moist soils, such as along streams and waterways. The fruit ripens in June and July.

Although the name implies that the fruit is not worth eating, this super-fruit has many great characteristics. Besides being a North American native shrub hardy to Zone 3, it also has white spring flowers, glossy green leaves, and orange-red fall foliage. The berries are attractive to birds and great for juicing.

I would not recommend eating the fruit raw, as it is very astringent, making you feel as if you have just eaten a cotton ball. However, the fruit is full of antioxidants and vitamins, therefore juicing is worth the time. Add the juice to drinks and smoothies, or boil it down to make a syrup for pancakes.

Sweetshrub (Calycanthus) is another native shrub, just like the previous 2 mentioned above. This southeastern U.S. native has light peeling bark, shiny green leaves, and aromatic flowers. The bark is the edible portion of this plant. It can be dried and used as a substitute for cinnamon or allspice, in moderation. The oils in the bark do contain calycanthine, an alkaloid that is toxic to humans and other animals.

So use the bark of this plant only in small amounts, if there is ever a shortage of cinnamon or allspice, which is unlikely.

What perennials are edible?

Hostas are one of the most commonly grown landscape plants in North America. I do not know of a single gardener that does not have at least one. The fact that the Japanese have been eating hostas for centuries is just becoming known in the United States. Hostas are our best shade lovers.

The young leaves of newly emerging hostas are the best parts to eat. They can be eaten raw, used in stir-fries or pesto, or mixed into salads. The flowers of hostas are also edible, though considered rather bland.

Dianthus is a fragrant flower used in borders and cottage gardens. The flower petals of this perennial are used often as garnishes in fancy restaurants, but the are quite edible and add a spicy flavor to salads, teas, cakes, and cookies.

What?! Yes, daylilies have edible flowers. Most Americans have at least a few daylilies in their landscape, from the ever-persistent Stella D’Oro, to any number of new, larger flowered varieties. I myself, just added a variety with the name of my great aunt, Mildred Mitchell.

Daylily flower buds and open flowers are both edible. The unopened flower buds taste like asparagus or peas, depending on your taste buds. The opened flowers can be picked, battered and fried, or chopped into salads.

Yes, ferns have some edible parts too. The fiddle-heads, which are the unopened fronds of the ferns, can can be pickled, fried, or sauteed in oil for an addition to salads.

You have all likely seen hibiscus tea or hibiscus flavored drinks at the store. Well, those drinks are flavored with the dried petals of hibiscus flowers, both hardy and tropical types. I grew a variety called Roselle, with dark red calyxes that were crunchy, but sweet to eat.

Hardy hibiscus comes in many varieties, and is one of the most common heat-loving perennials for gardens. The flower petals can be dried and used in teas, smoothies, jelly, or even to make pie.

What are some common shrubs with edible parts?

Roses are very common in landscapes across the world, if not just America. I even have a few, though I have varieties that require almost no pruning each season. Both rose flowers and rose fruit (called hips) are edible.

The flower petals can be eaten fresh, dried and used in teas, or used to make jelly or syrup. The rose hips are high in Vitamin C and antioxidants, and have been used for tea, sauce, and syrup making.

No, not poison sumac, but true sumacs with red berries. The berries are the edible parts. In some areas of the United States, one species, Rhus aromatica, is called lemonade berry. The red berries of sumac have a citrus-like flavor when sucked on. They can be added to tea or boiled to make jelly or syrup.

Everyone who learns this is totally surprised by it. Yes, lilacs have edible flowers. Besides being extremely fragrant, the flowers can be used in teas or boiled to make jelly or syrup. They have a very aromatic flavor reminiscent of honeysuckle.

While not all viburnums have edible fruits, several of the North American natives do. My favorite viburnums for berry snacking are Arrowwood (V. dentatum), Blackhaw (V. prunifolium), Nannyberry (V. lentago), and Rusty blackhaw (V. rufidulum). I have several of each of these species growing around my 5 acre property. The nannyberry has the best taste and largest fruits of these shrubs.

The berries of these viburnums can be eaten raw, or used to make jelly, jam, or juice. I like to just eat them raw while working outside or hiking through native forests where they are found.

What are some common trees with unknown edible features?

In bloom right now and for a few more weeks, redbuds have edible flowers and pods. While I have never tasted the young pods, which can be used in stir-fries or salads, I have tasted the honey-flavored flowers. The flowers can be eaten raw by themselves, or added to salads, cakes, cookies, or boiled to make jelly and tea.

Even though this is not a common tree in Northeast Kansas, it is popular and easily found in the southeastern U.S. This medium sized tree grows well in moist areas. The leaves, twigs, and roots are all edible. In many parts of the south, dried sassafras leaves are an important spice in many dishes.

The roots of sassafras are often dug up, boiled, and used as a poor substitute for coffee. I have never tried them, though the stems of the tree have fragrant, and spicy taste, difficult to describe.

While it may seem obvious to many that crabapples have edible fruit, most people would not know what to do with such small fruit. It is true that most crabapple species are grown for their flowers or leaf color, but there are several cultivars with larger, sweeter fruit.

However, you can still use the small fruit of many crabapples. The best way to use these small fruits is to collect, chop, and boild them down to make juice or sauce. Crabapple jelly can then be made from the juice.

There are all kinds of other edible plants in your landscape, you just have to be willing to learn what they are and how to properly use them. Now, with many people stuck at home, this is the time to learn about them. Besides the above plants, the following is a list of other plants with edible characteristics, have fun looking into them: