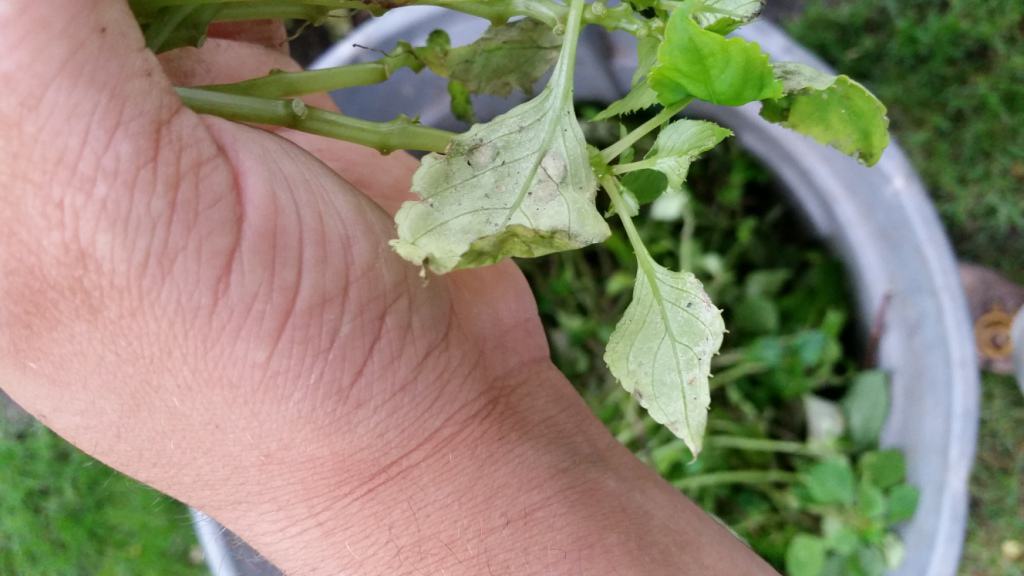 What a year this has been! With some of the coldest recorded winter days, a very wet spring and fall, and an exceptionally cool summer; we have seen a record amount of diseases popping up in landscapes across northeast Kansas and southeast Nebraska.  Typically, my consulting covers scorching, chemical drift, and wilting on trees and shrubs; this year I saw fire-blight, powdery mildew, and impatiens downy mildew.

Fire-blight is a bacterial disease affecting members of the rose family, mostly on apple, pear, hawthorn, firethorn, and crabapple. It is more common in years with cool wet springs and summers. The bacteria overwinter in cankers along dead portions of the trunk or stems. Symptoms start with discoloration of shoots and leaves that then turn black or “fire scorched” and wilt. Entire branches may die and the disease will spread downward through the plants, often killing small trees.  Proper cultural control is the best for care, pruning away the dead and diseased branches and burning the debris. When pruning, use an alcoholic wipe or disinfectant to clean your pruners after each cut, to prevent spreading of the disease. Also, do not prune in wet weather, as this is when the disease spreads most rapidly.

Powdery mildew is a common occurring disease in Kansas and Nebraska landscapes, on a wide range of host plants. We typically see some each year, from plants in areas of poor air circulation. It can be identified by the sight of white to gray powdery like substances on the top of leaves. While it can be devastating to vegetable crops such as cucurbits, tomatoes, and beans, it generally causes only an aesthetic problem on landscape plants. The most common landscape plants affected are lilac, peony, roses, garden phlox, and ash. The best method of control is to plant in areas of good wind movement, or plant resistant varieties.

Impatiens downy mildew has grayish white fungal growth on the lower surface of the leaf.

Impatiens downy mildew has been gaining momentum in larger cities and along the east coast as it wipes out large plantings of impatiens in both landscapes and greenhouses. It is characterized by white to grayish fungal growth on the lower surfaces of the leaves. It can defoliate an entire planting of impatiens in just a few days. This soil living disease has no cure and it is not recommended to replant impatiens in the same area for a minimum of six years.  My first sighting of it was in Sabetha, KS this year.

These diseases make up only a tiny portion of the diseases affecting our plants and I only mention them due to the increased number seen this year. Keep watching for more disease updates along the way!