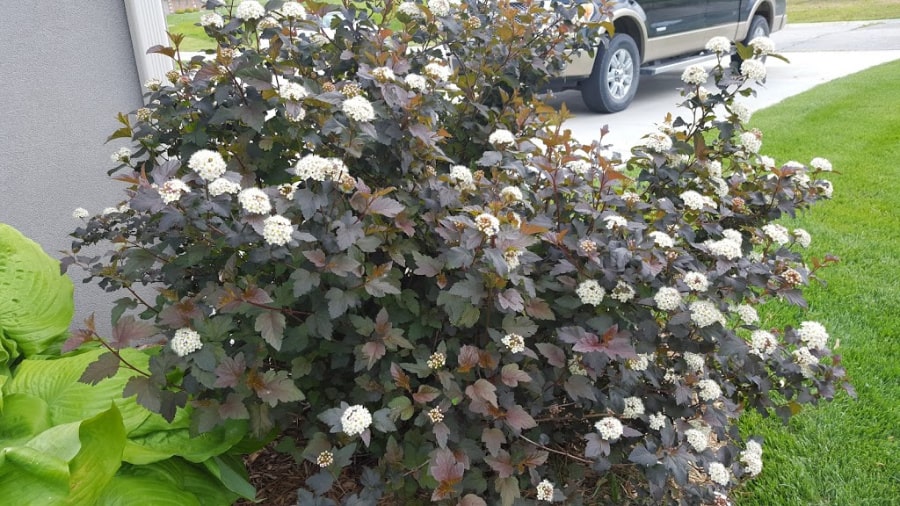 Now that we have our gardens growing and most of our vegetables in, we can start to take a look at the landscape to see what additions should be added. Dark leafed plants can add dramatic color and texture to the green world of the garden. These can be in the form of trees and shrubs, mainly. There are also dark leafed annuals and perennials, but I will not discuss them today.

While the number of dark leafed trees is not infinite, there are many to choose from for the landscape. Types of trees that have dark leafed cultivars include: Japanese and Norway Maple, Birch, Crabapple, Redbud, Beech, and Plums & Cherries.

Japanese maples are perhaps one of the most sought after tree in North America. The majority of them are only hardy to Zone 5 or 6, and maybe only a handful or less are hardy to Zone 4. This makes it difficult to plant them in the northern half of the United States.

These small, ornamental trees come in a wide variety of sizes and forms, with many of them weeping or cascading like a waterfall. Many of the prettiest of these trees are dark leafed forms. One of my favorite Japanese maples is the cultivar ‘Orangeola’, a maroon leafed, weeping tree, that only grows 6 to 10 feet tall and wide. I have a 10 year old specimen by my front walk.

There are many other dark leafed forms and cultivars. Cultivars include ‘Bloodgood’, ‘Emperor I’, ‘Hefner’s Red’, ‘Burgundy Lace’, ‘Moonfire’, and ‘Tamukeyama‘.

Japanese maples need to be planted where they receive protection from afternoon sun, on the east or north sides of the house, or in a shade garden. They have few, if any, pest problems in North America.

Norway maples are known to be invasive in the Northeastern U.S. However, their dark leafed forms are not considered invasive, as they rarely produce viable seeds.

‘Crimson King’ is an old standard maple, found in cityscapes across the country. If you drive down a residential street in almost any Kansas town, you will see one at least every 5th house.

You can still find ‘Crimson King’ in nurseries across America. However, a newer and better cultivar is available for the landscape: ‘Crimson Sunset’. This dark leafed cultivar has improved heat and sun tolerance over ‘Crimson King’. Both trees have few pests and grow 45 feet tall and wide.

I love birch trees. I had always wanted to have a birch in my landscape. As of last fall, I finally got my ‘Royal Frost’ birch planted and growing in the front yard. These majestic trees have white bark and burgundy foliage.

‘Royal Frost‘ is a best known of dark leafed birches, though their are other cultivars out there. This tree grows 40 feet tall and 20 feet wide. It is hardy to Zone 3 and is tolerant of wet soils.

While it is susceptible to Bronze Birch Borer, a simple application of a systemic insecticide in the fall will prevent this insect for a year.

Crabapples are mainly planted for their beautiful spring flowers. However, many have dark leaves and are excellent additions to the landscape. I myself have an old ‘Prairie Fire’ crabapple in my front yard.

‘Royal Raindrops’ is another dark leafed cultivar. It has rich burgundy foliage all summer long, before turning red and orange for fall.

Crabapples are native to North America and can grow in a wide range of soils. Most grow 30 feet tall and wide. There are also some weeping and dwarf selections for your garden.

When the redbuds bloom in spring, we practically sell out here. But many people do not think much about the tree’s looks after spring. There are several dark leafed redbuds that standout in the landscape all summer long, not just in spring.

Redbuds grow best in slightly moist to well-drained soils. They like shade when young but can grow well in full sun as they mature. Larger cultivars grow 30 feet tall and wide. There are several weeping forms.

Cultivars with burgundy or maroon foliage include ‘Ruby Falls’ and ‘Forest Pansy’, but there are others out there.

The beech tree is a large and majestic tree in both Europe and America. While there are no native beeches found in Kansas or Nebraska, we can grow them and the cultivars ‘River’s Purple’, ‘Tricolor’, and ‘Purple Weeping.

Beech trees have edible nuts and can get quite large, up to 80 feet tall for the North American native beech. They grwo best in well drained soils but are quite adaptable to other conditions.

The purple leafed plum tree is a common sight in many older landscapes in my area. While most of them only grow 10 to 20 feet tall and 10 feet wide, they are quite popular.

However, purple leafed plums are subject to the most aesthetically annoying disease, black knot. This fungal disease covers susceptible plums and cherries with ugly black crusts that cannot be easily removed or treated.

Adding dark leafed shrubs to the landscape really adds that pop of color! I cannot express enough the use of these shrubs to enhance the garden. When I look at my own shrub borders, my eyes are immediately drawn to the burgundy colors of ninebarks. Shrubs with dark leaves include ninebark, weigela, smokebush, barberry, and elderberry.

As I have mentioned in previous posts, ninebarks are wonderful shrubs for almost any landscape. They can grow in full sun to part shade and can be shaped and pruned at any time during the growing season. Ninebarks have very few problems, just powdery mildew when they get too wet.

Cultivars that have dark leaves include ‘Little Devil‘, ‘Coppertina’, ‘Diablo’, ‘Center Glow’, and many others. They have pink or white flowers in mid spring.

Weigleas are very versatile shrubs, similar to ninebarks, but with better flowers. The flowers are tube shaped and attractive to hummingbirds. The plants can be pruned right after flowering or in late winter.

Weigelas grow best in full sun to part shade and are adaptable to many soil conditions. I have not seen any major pests of these beautiful shrubs.

Cultivars with dark leaves include ‘Shining Sensation’, ‘Wine and Roses’, and ‘Fine Wine’.

The smokebush, also known as the smoketree, is a large shrub. One variety is native to North America. These shrubs produce airy, smoke-like flower panicles in summer. The leaves are arranged in the stems in whorls, a unique arrangement for any plant.

Dark leafed forms of the smokebush are popular in gardens and it is a nice shrub with no problems. They grow quickly and can be pruned to the ground every spring for a flush of new growth.

The barberry is one of most commonly used landscape shrubs in North America. There are dozens of cultivars of both dark and green leafed barberries. Despite is use, it is also considered invasive in many parts of the country and only sterile cultivars should be used.

Barberry is best known for its small, needle-like thorns that make pruning a nightmare. However, it can hold its shape well once pruned.

Dark leafed cultivars include ‘Crimson Pygmy’, ‘Cabernet’, ‘Rose Glow‘, and ‘Royal Burgundy’. They grow best in full sun to part shade and are drought tolerant. They have no disease or insect issues.

While there are only a couple of cultivars of dark leafed elderberries, they are a delight in the garden. ‘Black Lace’ elderberry has dark, maroon leaves and bright pink flowers. It grows well in sun or shade and has a feathery fern-like appearance.

Elderberries can grow in wet areas, though not in standing water like a stream or lake. They have very few insect or disease issues and are native to North America.

Dark leafed plants are a boon to any landscape. If you are someone who has a lot of green in the landscape until the flower bursts of June, add in some dark leafed plants for contrast and texture. And remember…