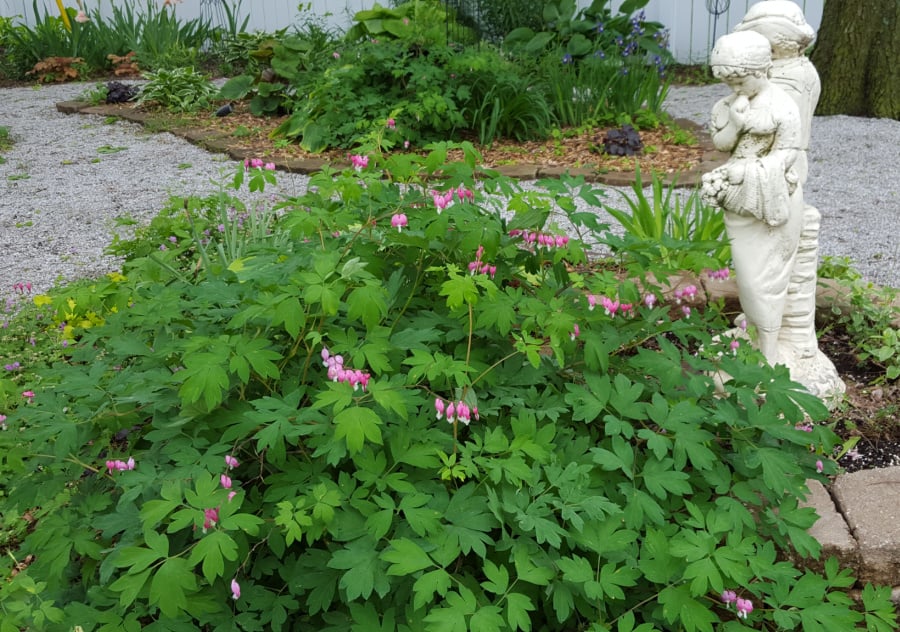 The bleeding hearts are our 2021 Plant of the Month for April. I love these plants in my garden, as well as the native ones growing in the woods nearby. Each spring I look forward to their fern-like foliage, topped with pink, red, or white “hearts”.

Where do I plant Bleeding Hearts?

In the shade. Both native and Asian bleeding hearts like to be in the shade. They are naturally spring ephemerals, which means they grow early in the spring, set seed, and die when the heat is turned up. Despite this, they can be very long lived perennials in the garden.

I planted my various bleeding hearts among other things in the shade garden. They grow well under a variety of trees, including black walnuts. I have 3 kinds of the Asian ones in my garden, as well as Dutchman’s breeches and fringed bleeding hearts.

Plant them where they will be protected from late afternoon sun, such as on the east side of the house, or among large, mature trees. You can plant other things next to them that will hide their fading foliage.

The Asian varieties get about 2 feet tall and wide, but rarely spread by seed in our area. However, the native species will spread and make a nice blanket of flowers in a woodland garden.

What are some of the cultivars available?

There are quite a few bleeding hearts available in the nursery these days. I really like the Asian ones because their plants are large and the flowers are showier than the natives. Cultivars include:

These are the most commonly found varieties in our area.

Are Bleeding Hearts good for pollinators?

Supposedly, they attract hummingbirds. I have my first hummingbirds arrive in April, when they are blooming for sure, but I have not seen the birds visiting the flowers. However, on the native Dutchman’s breeches, I have observed native bumblebees working away for pollen.

What companion plants of bleeding hearts are good for pollinators?

There are a variety of shade garden companion plants that are frequented by pollinators. Most people do not think of the shade garden as a place for pollinator plants, but there are more than you would imagine.

What is the maintenance on bleeding hearts?

I like to prune back my dicentras once the foliage has begun to turn yellow and fade. This usually happens in late June or early July, when the weather turns hotter. Using pruners, cut the stems of the plant to the ground. By this time, there is often another plant that will be crowding it, ready to take over the spotlight.

If you have an open spot in the landscape after cutting the foliage off, stick in some shade loving annuals such as impatiens, coleus, or begonias.

The Asian bleeding hearts are very long lived perennials and do not require any division. Unlike other perennials with similar fibrous root systems, they do not benefit from division. However, if you want to move them around the landscape by division, you can do so without harming the plant.

Bleeding hearts are a staple in both the woodland garden as a spring ephemeral and in the shade garden before the showy hostas have filled out. Use them where shade is a problem and you need that pop of color early. Also, plan on using a few for early spring floral arrangements, they hold up well for a several days.