Skip to content
Home > Posts > Aphids in the Garden and Landscape 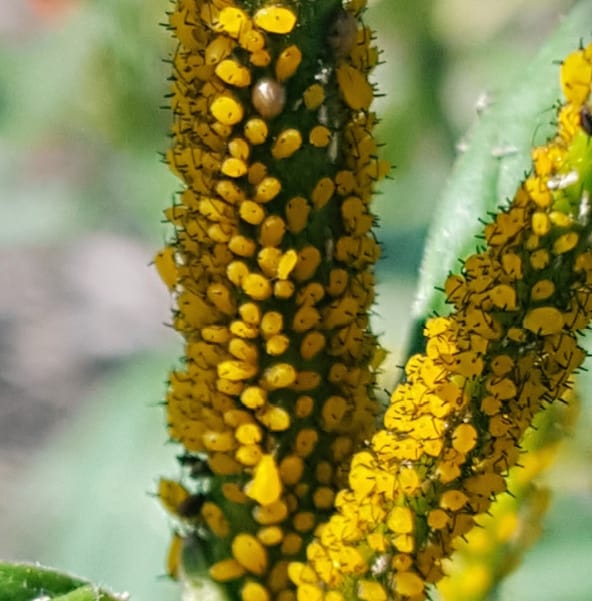 Aphids can be a real tricky problem to manage. These tiny little pests are one of the most annoying insects in the garden, if you let them be anyways. Most of the time, you will not even see them, because it is only when populations explode that we see pests at all. And aphids can have some big population explosions.

Before we get into how to manage your aphids, you need to know a little bit more about them. What is the aphid life cycle? How many types of aphids are there? And what is the relationship between them and ants?

There are many thousands of aphid species and genera within the world, and certainly too many to name here. If you want to be an entomologist who specializes in aphids I am sure you would find work to keep busy. Anyways, aphids in our home landscapes and gardens mostly follow a simple line of reproduction.

It is because of asexual reproduction that aphids can reproduce so fast as to take over a plant with a population explosion. But do not fear, for the other insects know it too.

The Relationship Between Ants and Aphids

Ants and aphids have a mutualistic relationship. They both gain something from each other, therefore the ants are not attacking. Ants are foragers and opportunistic feeders, meaning they eat a wide range of foods. From your picnic sandwiches to the last drops of soda in the can you threw away, to the poop of aphids.

Also known as honeydew, aphid excretions (poop) are full of plant sugars that the aphid gained with its piercing-sucking mouthparts. The ants collect the honeydew for food, and in turn they protect the aphids from predators. What predators?

There are a lot more predators of aphids than most would expect to find. When you see a cluster of aphids feeding on your plants, how often do you grab a magnifying glass and really look close? You should, because it is a whole process of prey and predator going on. Only in dire situations do you need to do anything more than sit back and watch when it comes to aphid problems.

I am going to go over 6 different insects types which feed on aphids. Between these types, there are many hundreds of species of predators to eat those pests. And they do keep them in check, despite the best efforts of the ants.

What are soldier beetles? Resembling fireflies when on flowers and plants, soldier beetles are common predators of a variety of soft-bodied insects, including aphids, mealybugs, and lacebugs. There are as few as 3500 species of soldier beetles worldwide, with 468 listed in the United States. Our most commonly seen soldier beetle is the Pennsylvania leatherwing, a yellow-orange beetle with a long black stripe.

Soldier beetle larvae hatch in the soil and remain there, eating pests and grasshopper eggs until they pupate. After becoming adults, they begin to feed on other insects, including aphids.

Lacewings are primarily feeders of lacebugs, especially on oak trees (Tallamy, The Nature of Oaks), but are also eaters of aphids and other soft-bodied insects. The lacewing in a narrow insect, usually either green or brown, with about 118 species in the United States. The larvae are the real predators, gobbling up aphid nymphs as they move along a leaf surface.

There are around 400 species of lady beetles in North America, but most people are only aware of the multicolored Asian lady beetle, which is more a pest than a predator. Even though these beetles do feed on aphids, they get into houses and can cause skin irritations with there excrements.

The native lady beetles are quite varied and very interesting. I have observed many different types of lady beetles within my gardens, and the twice-stabbed is my favorite. It is solid black, with 2 red dots, 1 on each outer wing covering. Lady beetle larvae prey on aphids and other soft-bodied insects, but are well-known in greenhouses for predation on the aphid. You can buy lady beetles commercially to release in greenhouses or the landscape for aphid control.

Wait, flies eat aphid nymphs too? Yes and a lot of other pests too. Long-legged flies look pretty, as many are metallic green or blue in color, and they are predators of aphids, whiteflies (not a true fly), and spider mites. If you see populations of aphids on a plant, look to see what other insects are around. You will most likely see a few long-legged flies nearby.

Hover flies or syrphid flies are often seen “hovering” or landing on flowers where they feed on nectar and pollen. The adults are considered good pollinators of a variety of flowering plants. Many of the hover fly larvae are specialists, preferring to feed on specific plants or insets. But others are generalists, and will feed on aphids, thrips, and other plant-sucking insects.

Also called parasitic wasps, parasitoid wasps are a big part of the management of aphids in the garden. Often not much bigger than the aphid itself, parasitoid wasps are seen hovering or landing among great quantities of aphid clusters. If you see large, tan or dark colored aphid blobs, then you are seeing parasitized bodies of the aphid. Sometimes you will see a hole at the back end of these blobs; that is where the wasp emerges after its life cycle within the body of the aphid.

The adult wasp lays an egg inside of a living aphid, which then hatches and begins to feed from the body of the aphid (like a parasite). Eventually the larvae matures enough to pupate (after 5 to 7 days) and become an adult wasp, which then cuts itself a circular door in the mummy of the aphid.

Other Predators of Aphids

Insects that you may be familiar with as predators, but not of aphids can include the following:

These are mostly generalist feeders, eating whatever they come across.

Like I said above, the do nothing approach should be used primarily when dealing with aphid population explosions. Only on certain plants should chemical control be used. Let me explain what happens.

When a pest population, such as aphids, explodes to the point where you start seeing them in the garden, the predator population has not quite caught up yet. It is at this point that most gardeners will reach for their chemical sprays to cleanse the plant of pests. However, 99 percent of the predators that are already there are killed with the 97 percent of pests. For chemicals rarely kill all the pests, even if you change mode of actions.

What happens next is that the pest population explodes again, only this time there are no predators to keep it under control, and they are resistant to the pesticide. So the gardener sprays again, maybe changing chemicals, and the next batch of pests are resistant to both chemicals. This repetitive arrangement is why you should only use chemicals as a last resort.

There are 2 exceptions to the do nothing approach with aphids in the garden or landscape (this does not apply to greenhouse or indoor growing).

You have now learned that I typically do nothing when I see aphids. Rather, I let nature take its course and have a meal on me. If you have plenty of garden diversity in plants, insects, birds, and reptiles, you will have less insect and pest problems overall. So put the chemicals back on the shelf and save them for invasive pests.

2 thoughts on “Aphids in the Garden and Landscape”